July 2020 was looking to be a fairly unremarkable month in terms of climate statistics for the UK, until hot conditions closed the month on the 31st.

Overall it was a cool month, with most days having temperatures below average. Successive low pressure systems brought cloud, rain and predominantly westerly winds across parts of the UK, keeping temperatures down. The UK as a whole was -0.8°C below the long-term (1981-2010) average for the month. As the anomaly map indicates, the south-east of the UK was the only region to get close to average temperatures for July.

One outlier of the July statistics is the maximum temperatures recorded on Friday 31st July. Tim Legg from the Met Office’s National Climate Information Centre, said: “An area of low pressure in the Atlantic acted to draw warm air up from the continent, bringing a day of heat to much of the UK with a particular focus on the south-east. The top temperature recorded was 37.8°C at Heathrow, with Kew Gardens in London close behind with 37.3 °C. This made it the hottest day of the year so far by some margin, and it also measures as the third hottest day on record in the UK.”

The heat was short-lived with a cold front moving in from the west making some places 10°C lower the following day. Only Wisley, in Surrey, and Holbeach, in Lincolnshire, reached heatwave criteria, with Thursday, Friday and Saturday just reaching the temperatures required under the definition. 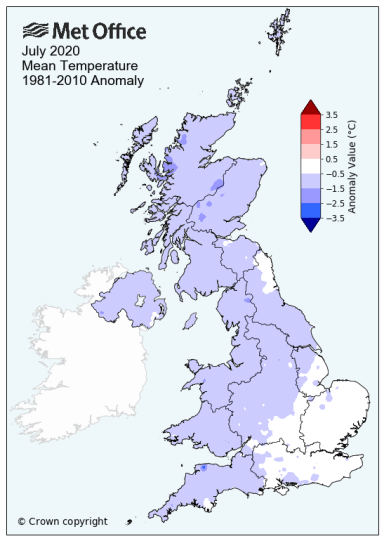 Rainfall was above average across parts of Wales, north-west England and Scotland through the month with some locations in south-west Scotland and north-west England recording more than double the average July rainfall. This is also linked to the successive low pressure systems through the month, a product of the jet stream following a more southerly track than usual for the time of year. In contrast the south coast of England has been somewhat drier than average. West Sussex was the driest county compared to average, with just 52% (27.5mm) of its average rainfall for the month. 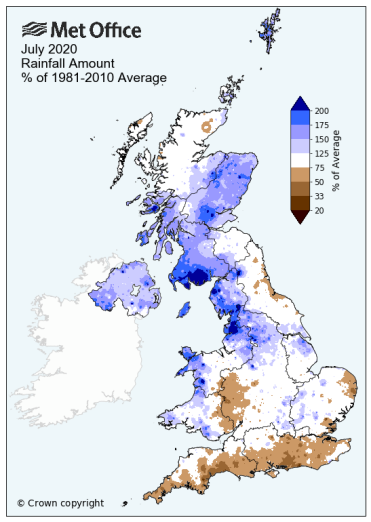 Sunshine has been below average at 83% (142.4 hours) overall for the UK. The east of Scotland and south of England saw close to average sunshine. It was particularly dull for Northern Ireland with just 59% (83 hours) of the average sunshine hours. Further evidence of areas of low pressure influencing the UK, especially in the west. The exception has been Shetland which has seen above average sunshine for the month with 136% (172.1 hours) of the long-term average (1981-2010) sunshine. 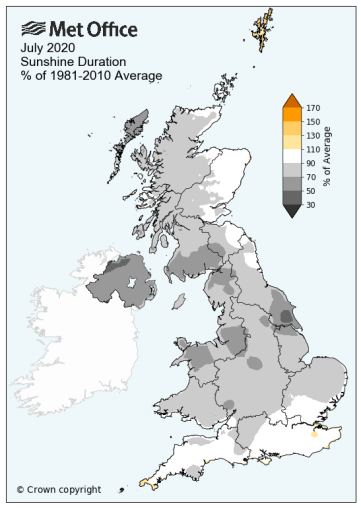 You can keep up to date with the weather using our forecast pages and by following us on Twitter and Facebook, as well as using our new mobile app which is available for iPhone from the App store and for Android from the Google Play store.