A dull and damp August brings Summer to a close

Despite several notable weather events, neither the month of August nor the summer as a whole for 2020 will be remembered for being particularly prominent from a climatological point of view.

Although there was a major summer heatwave in the middle of the month of August for England and Wales, with temperatures reaching 36.4°C at Heathrow and Kew Gardens on 7th, more unsettled and cooler conditions at the start and end of the month balanced the month out. Much of the UK was above average for mean temperature in August, with East Anglia and the south east of England the highest over the long-term average. Suffolk, Kent and East Sussex were the counties with the highest mean temperatures compared to average (2.5°C above). 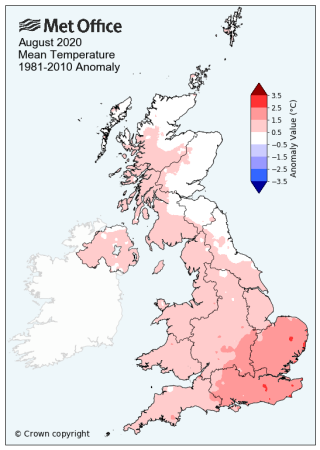 It was a wetter than average month for most except for the south east of England and north west Scotland, where Sutherland only recorded 30% of its average monthly rainfall (31.5mm). Some regions recorded more than twice normal August rainfall, Herefordshire recorded 226% of its average for the month and Midlothian 228%. The hot spell of weather triggered some torrential downpours that saw 30-60mm falling in just a few hours, making up considerable proportions of monthly totals in single rain events.

There were two named storms in August in quick succession that brought strong winds and heavy rain to parts of the UK. A turbulent spell of weather late in the month saw a strong jet stream bringing deep areas of low pressure towards the UK. Storms Ellen (19th to 21st) and Francis (25th) brought wind gusts of 46 to 58mph across inland areas and 58 to 70mph across exposed coastal locations. Wind speeds reached 79mph at Capel Curig, Conwy during storm Ellen and 81mph at Needles Old Battery (Isle of Wight) from storm Francis. These were two of the most notable August storms in the UK in the last 50 years but were not unprecedented.

For the season as a whole, the UK has been warmer than average (by 0.38°C), with the focus of above average mean temperatures in the south east of the UK. Warmer conditions in June and August have been partly offset by a cooler than average July. Suffolk had the highest mean temperature compared to average (+1.06°C)., County Fermanagh (-0.03°C), Kincardineshire (-0.22°C) and the City of Aberdeen (-0.13°C) were among only five UK counties to be below average for mean temperature through summer 2020.

All three summer months have been wetter than average for the UK, although south east England and north west Scotland are the exceptions when looking at a more local level. Kent was the driest individual county compared to average, with 76% of the average summer rainfall (111.3mm). North west England, south west Scotland and Northern Ireland saw the wettest summer relative to average, with around 150% or more of average rainfall. This year joins a small cluster of years that have experienced a warm-wet summer, where more typically we might expect warm-dry or cool-wet.

Sunshine has been below average in total duration, most notably so for Northern Ireland and Wales. The UK as a whole only had 89% (449.3 hours) of its average summer sunshine, with Northern Ireland only recording 73% (313.9 hours). Only a handful of counties in the south east of England and north Scotland recorded above average sunshine hours for summer 2020.