Zooming in on climate forecasts: the launch of UKCP Local (2.2km) 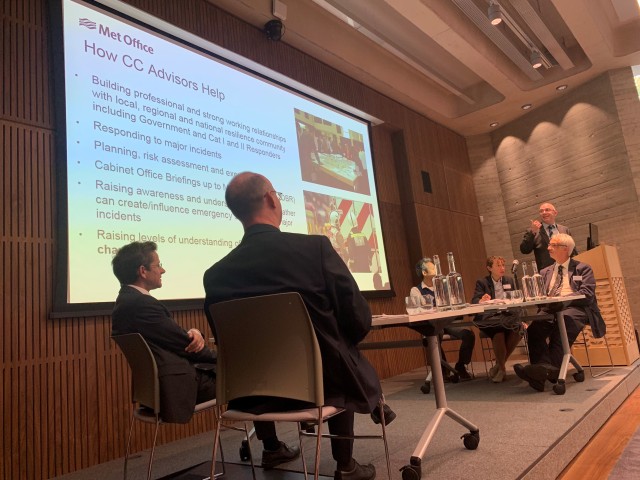 Earlier this week, the Met Office, BEIS, Defra and the Environment Agency launched the latest component of the UKCP climate projections, 12 projections of how the future climate could evolve, using a climate model resolution of 2.2km. Press release here.

Professor Jason Lowe, who has been leading the project for the Met Office, said: “Across the UK, we have all become accustomed to seeing very spatially-detailed models for weather forecasting a few days ahead: this new set of projections applies similar – kilometre-scale detail – to climate projections, several decades into the future. It provides users of the data with the most detailed glimpse of the future, enabling them to make informed decisions about how to plan for what could be some of the most damaging impacts of climate change.”

At a packed event in London, invited guests – including representatives from the user groups who helped with the development of UKCP – heard a range of speakers examine the capability of the latest phase of UKCP data, known as UKCP local (2.2km).

Dr Lizzie Kendon, a climate scientist with the Met Office, explained some of the benefits of this higher resolution. She said: “By working at a finer scale, we’re more clearly able to model for certain geographical features, such as mountains, coastlines and built-up areas to see how these can influence weather at a local scale. The higher resolution also enables us to gain an insight into weather features like convective summer rainfall that happen at a scale smaller than the resolution of the coarser outputs, such as the 12km regional projections. This is particularly important with events like summer thunderstorms which can unleash huge volumes of rainfall such as the event which occurred in Boscastle, Cornwall, in 2004.”

At the heart of the development of the UKCP portfolio was the idea of a set of projections which could be used together, with each providing a slightly different view of the world. Professor Lowe said: “Within the UKCP suite of products there are a range of different tools to investigate the future. For instance, users interested in looking at the range of seasonal warming for different levels of greenhouse gas emissions might focus more on the probabilistic forecasts. Users interested in the large-scale drivers of a changing climate, including beyond the UK, might focus more on the global 60km resolution projections. Those most interested in extremes or sub-daily metrics can focus more on the 2.2km projections. Whichever strand of UKCP is the focus we typically recommend using several of the strands together to get the most complete picture of the future.”

Elements of UKCP use different views of how greenhouse gas emissions will change in the future, covering cases from big reductions in human-driven emissions to a case with large future increases in emissions. In other parts of UKCP – because the calculations are so computationally intensive – we have only been able to run one emission case. The UKCP local (2.2km) projections use the RCP8.5 emissions scenario, which relates to a change in global temperature of around 4.0 C by the 2070s, relative to the period 1981-2000.  Jason Lowe added: “This does not mean this emission future is the most likely – the choice of scenario is still open for the world to make, and the majority of nations have pledged to aim to limit warming to well below 2.0 °C.

“When choosing which scenario to adopt for UKCP local (2.2km), it was agreed to use the higher RCP8.5 case. This is partly because risk-averse decisions, such as how to protect people from potentially dangerous flooding, often take a precautionary approach. It is also because choosing a high-emission scenario also allows users to estimate the response for lower levels of future global warming – for instance by scaling the projections or focusing on results earlier in the century.”