Climate change: how can the maritime industry be more resilient?

As a maritime nation, the sea has been an integral part of our heritage. But with climate change increasingly impacting the UK, the Met Office’s Tom Butcher examines how maritime industries will cope.

As a maritime nation, the sea has been integral to our heritage. NLV Pharos, next to HMS Belfast, made an apposite venue to discuss the future impacts of climate change on the marine sector. Photos: Simon Hammett, Met Office

Climate change will cause sea-levels to rise dramatically throughout the 21st Century, regardless of mitigation efforts, and coupled with this, coastal and offshore infrastructure is also vulnerable to changing patterns of storm conditions. So adaptation strategies for offshore, maritime transport and ports industries will be crucial in limiting the impacts of the changing climate on the global economy.

But how resilient are the UK’s maritime industries to today’s weather extremes; and how well are they adapting to future climate change? To explore these issues we brought together senior cross-industry professionals, as well as government and other stakeholders during London International Shipping Week. 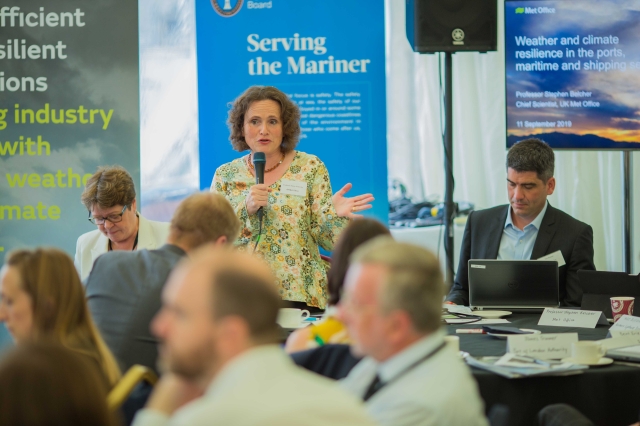 A seminar was hosted on board the Northern Lighthouse Board’s supply ship NLV Pharos, moored alongside HMS Belfast on the Thames, -an apposite location given the river’s long and proud history as a vital hub for UK shipping and trade. 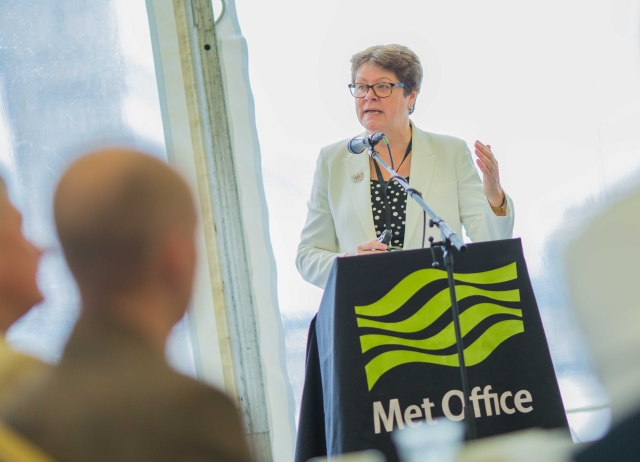 Baroness Brown of Cambridge – Chair of the Adaptation Committee of the Committee on Climate Change outlines the potential climate impacts facing the marine sector.

The event was opened by Nusrat Ghani MP the Parliamentary Under Secretary of State with responsibility for maritime issues. Baroness Brown of Cambridge (pictured above) set the scene by presenting her perspective as Chair of the climate adaptation committee of the Committee on Climate Change.

Met Office Chief Scientist, Professor Stephen Belcher, provided an update on the latest understanding of weather and climate science, and four panel speakers – representing different parts of the maritime sector – gave their perspectives on how well adapted their organisations were to climate change. Round-table discussions allowed all delegates to share their perspectives on the topic.

A number of organisations within the ports, shipping and offshore sectors are undergoing digital transformations utilising connected technologies. This creates new opportunities for the use of weather information alongside asset and operational data in new and exciting ways to increase automation and improve efficiency. To fully realise this opportunity,industries need to explore new ways of sharing the huge amounts of valuable and available data. It was highlighted that it may take some time for the benefits of these technologies to be realised by smaller port and ship operators who may have ageing infrastructure and lack the deep pockets to fund technology investment.

Many of the commercial organisations represented recognised the need to adapt to climate change, but expressed some scepticism about how this might be achieved given the economic constraints on their business which may prevent taking a very long-range view. During his presentation, James Trimmer, from the Port of London Authority (PLA), identified some ways through which this could be overcome. The PLA conducted a climate-risk assessment as part of a response to government for the Adaptation Reporting Power. The PLA was aware of some key weather and climate issues on the river such as sea-level rise, fog and wind; but until completion of its latest adaptation report it had not considered the risks associated with peak flow on navigation on the upper Thames. As a result, they established a warning system for the safety of rowers on the river, and this was almost immediately put to the test during sustained flood conditions in January and February 2014, resulting in an immediate benefit.

Baroness Brown of Cambridge identified the importance of interdependencies between industries and adaptation in her presentation, and this was echoed by participants during some of the following round-table discussions. For example, the tidal surge that affected the east coast during December 2013 caused direct impacts such as closure and overtopping of some ports and harbours, and the diversion of many ships. However, some of the problems experienced by port and ship operators were secondary, caused by flooding of power stations or the inability of staff to get to work due to the associated windstorm and inland flooding of roads. It is only by putting those adaptation strategies in place that strengthen supporting value chains – as well as key coastal and offshore infrastructure – that maritime industries will be resilient.