Now we are in Autumn and the nights are getting longer the chances of seeing the Aurora borealis (or Northern Lights), particularly in the northern parts of the UK, is once again on the increase.

The science behind this is not fully understood, but the periods around the Spring and Autumn equinoxes tend to see an increase in the sightings of the aurora here in the UK compared with Winter and Summer. 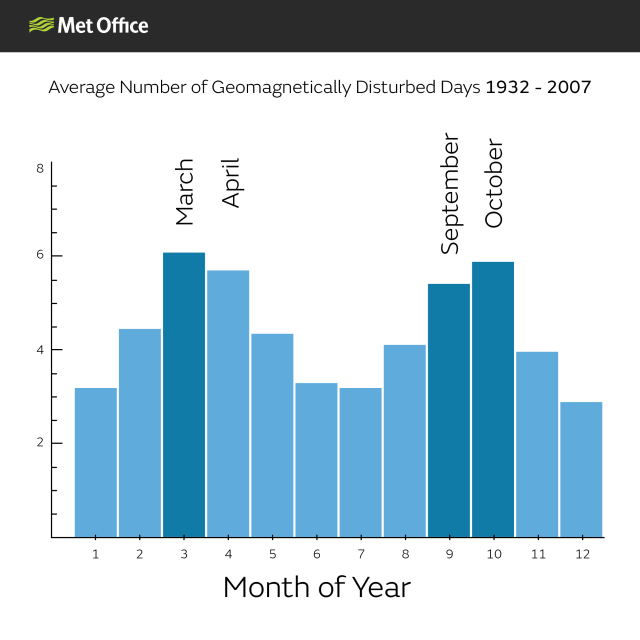 There is an additional factor leading to an increase in the chance of seeing the Northern Lights at the moment.

The Sun goes through an 11 year solar cycle, from solar minimum, through solar maximum and back to solar minimum. We are now in the declining phase of the solar cycle following the solar max which occurred in early 2014. During the current phase of the solar cycle coronal holes that begin the cycle in the Sun’s ‘polar’ regions have now migrated towards the Sun’s equator, meaning they are on a similar line of latitude to the Earth (i.e. facing the planets rather than directed north and south out of the solar system). These coronal holes give rise to high speed solar wind streams that buffet the Earth, disturbing the Earth’s magnetic field.

In other parts of the solar cycle these disturbances are largely as a result of coronal mass ejections, which can give larger magnitude disturbances than these high speed streams. The coronal hole expected to generate auroras later this week is the dark area indicated in the graphic below.

The strength of the disturbance directly relates to how far south the aurora is visible (or how far north if you are in the southern hemisphere), and of course you need clear skies to see it.

Over the last few nights the Aurora borealis has been seen as far south as Northumberland and the chance of seeing the lights continues over the next few days if the weather conditions allow.

Keep an eye on our space weather forecasts here and follow us on Twitter @MetOfficeSpace, if there’s a chance of seeing the aurora in the UK we’ll let you know.

The Met Office works closely with the British Geological Survey in Edinburgh to forecast these geomagnetic events and the BGS website provides to the minute information on the current activity levels as well as ‘Tips on viewing the Aurora’. The BGS website includes a display of the aurora forecast model which is run by the NOAA Space Weather Prediction Centre, we are working on implementing this model at the Met Office.

Let’s hope for clear skies and plenty of beautiful displays – if you are one of the lucky ones let the scientists know by tweeting about it on Geosocial aurora.

1 Response to Keep your eyes peeled for aurora borealis