Parts of Pakistan and north-west India to endure +50C temperatures

A brutal heatwave that has enveloped parts of southern Asia since the end of April looks set to intensify, says the latest forecast from the Met Office.

Nick Silkstone is a meteorologist with the Met Office’s Global Guidance Unit. He said: “Temperatures are expected to peak on Saturday, when maximum values could reach around 49-50°C in the hottest locations, such as Jacobabad, and the Sibi area of Pakistan.

“These values are around 5-7°C above average for the time of year. The heatwave will ease into Sunday and the early part of next week when temperatures return nearer to average with maxima in the low 40s°C.

“However, temperatures are expected to trend upwards again during the second half of next week, and reach similar – or even slightly higher – values to the current spell by the following weekend.” 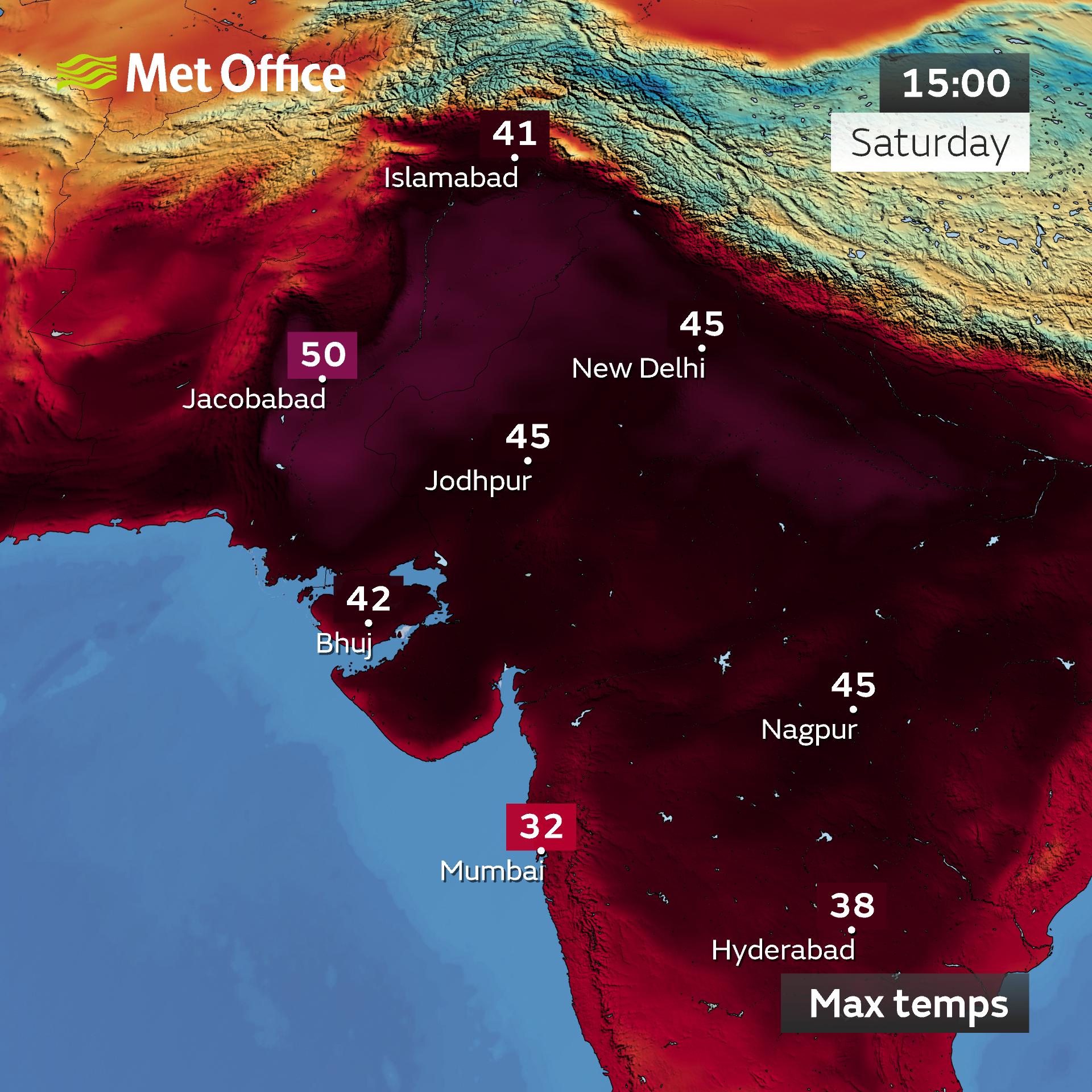 Parts of north-west India and Pakistan could witness temperatures of more than 50C in coming days.

Official observations show the current run of very hot days began on the 7 May, with absolute maxima of 48°C being recorded at both Jacobabad and Sibi in Pakistan. Yesterday (11 May) the highest temperature was again at Jacobabad with a maximum of 47.4°C.

Nick Silkstone added: “The extreme heat poses risks for local communities and adds to the threat of wider environmental impacts, such as wildfires and the threat of glacial lakes creating flash flooding events as the ice in front of these lakes gives way due to the extreme heat.” It is understood that the authorities in Pakistan and elsewhere in the region are on high alert in the case of a glacial lake outburst flooding incident triggering downstream impacts.

“Although it is too early to say definitively that the southern Asian heatwave has a direct link with climate change, we know there has already been considerable background warming driven by a changing climate often making current extreme heatwaves even more extreme.”

“Heatwaves have multiple and cascading impacts not just on human health, but also on ecosystems, agriculture, water and energy supplies and key sectors of the economy. The risks to society underline why the World Meteorological Organization is committed to ensuring that multi-hazard early warning services reach the most vulnerable,” said WMO Secretary-General Prof. Petteri Taalas.

Why do India and Pakistan get so oppressively hot at this time of year?

As the Northern Hemisphere Spring progresses, the point on the earth directly beneath the sun during the middle of the day (known as the sub-solar point) progresses northwards. This is currently across central India, meaning that the largely dry landmass (as the dry northeast monsoon continues) is baked by the directly overhead sun.

In addition, atmospheric subsidence above this region causes the air to heat (by squashing the air in a process known as adiabatic compression). This effectively acts as a lid and allows temperatures at ground level to increase further.

Nick Silkstone added: “Episodes of strong subsidence across this region, are strongly correlated to the most severe heatwaves. This pattern is only transient, as eventually the large-scale wind patterns reverse causing the onset of the wet phase of the monsoon which brings some relief from the oppressive temperatures in this region.  Although for NW India and Pakistan the wet phase of the monsoon doesn’t usually reach them until late June to mid-July.”

You can hear more about the southern Asian heatwave on our latest Weather Snap podcast.