The second half of December has seen dramatic swings between different weather patterns. Storm Bella brought strong winds and flooding, while the current flow of air from the north is bringing colder conditions with ice and some snow across the UK. With dramatic changes in weather over the last two weeks, what is the pattern for the first half of January?

We expect the northerly feel to continue into the new year, however, as we look further ahead there are currently conflicting meteorological signals. To gain an understanding of the longer-term outlook forecasters need to look at signals from around the globe.

Adam Scaife, Head of Met Office long-range prediction, said: “Our latest forecasts now show that a sudden stratospheric warming (SSW) is expected in the first week of January which will maintain the chances of colder weather throughout the coming month.

“During an SSW intense warming occurs high in the atmosphere at around 30km above the North Pole. This is accompanied by a complete reversal of the winds that circulate around the Arctic at high altitude and the mean wind direction switches from the usual strong winter westerlies to easterlies. 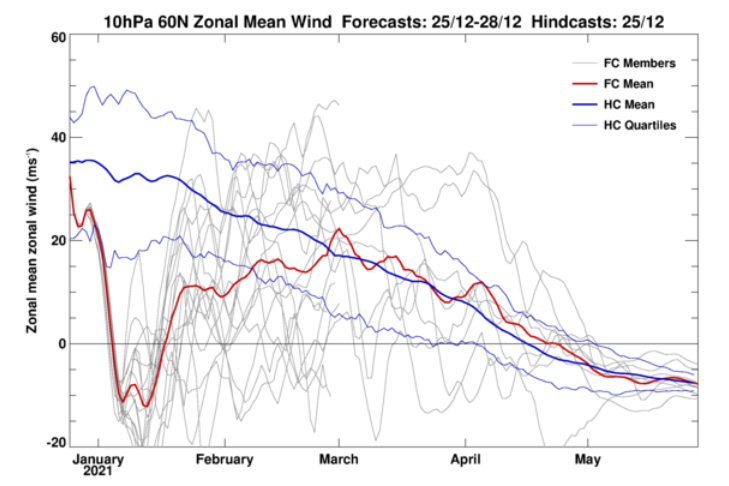 “The easterlies at high altitude then slowly burrow down towards the lower atmosphere where our weather occurs. This process increases the chances of colder weather right across Northern Europe for several weeks after the event first occurs high the stratosphere.”

Met Office Chief Meteorologist Paul Davies said: “It’s important to note that not all SSWs lead to colder-than-normal conditions over the UK and there are other global weather factors that can impact our winter weather. This year they include a La Nina.

“During La Nina the second half of the winter in the UK tends to be dominated by milder and wetter conditions which come from the Atlantic on an invigorated jet stream. In effect, we have two opposing forces for winter supremacy at play; the SSW and La Nina.

In the meantime, and consistent with a SSW in early January, our current 6-30 day forecast points to the  likelihood of the cold conditions experienced recently continuing through January.”

Keep up to date with the latest forecast for your area using our forecast pages and by following us on Twitter and Facebook, as well as using our mobile app which is available for iPhone from the App store and for Android from the Google Play store.