A warm and dry June so far

As we reach the mid-point in June, statistics for the UK as a whole show that the weather has been warm and dry for many with temperatures over 1 degree above average so far and rainfall just 33% of the whole month’s average total. This follows on from what was, for many, a dry and warm May. 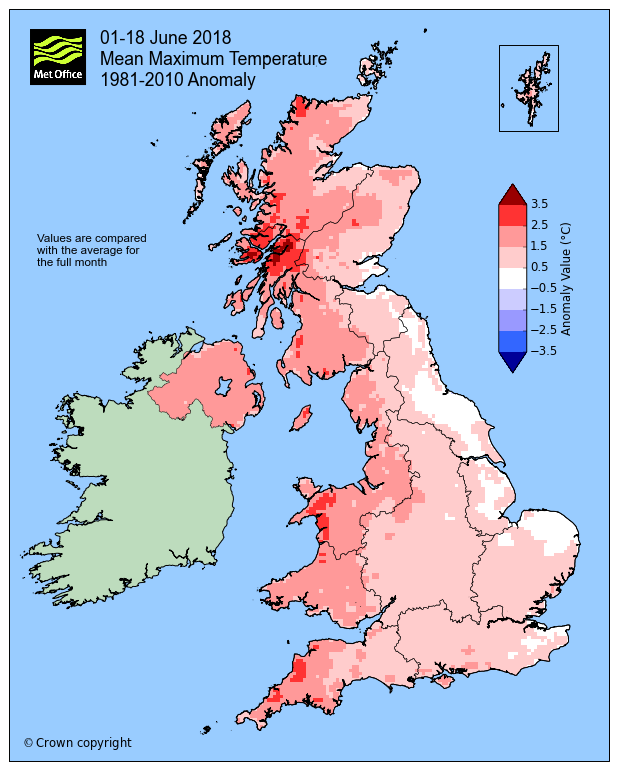 Max temperature for June 2018 so far compared to monthly average 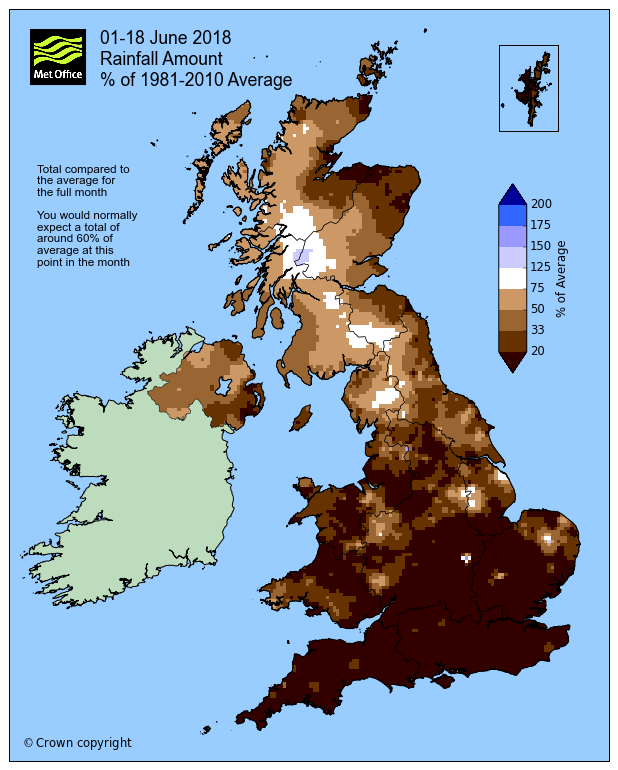 Rainfall for June 2018 so far compared to monthly average

While temperatures overall this month so far have been above average there have also been some regional differences, with the east side of the country generally being nearer average, for example Lincolnshire and Kent are so far just 0.4 °C above the average maximum. However, the west side of the UK has seen higher temperatures with areas such as Cornwall and Cardiganshire being 2 °C above the average maximum so far this month.

Looking back at the rainfall figures for spring it was north-western areas that were the driest, with only around half the season’s average, the reverse of rainfall amounts so far this month. It was however a rather wet spring in most eastern, central and southern areas, with rainfall 50% above normal in the wettest places.

The latest figures from UK water companies show that following the spring rainfall the water resources outlook remains healthy for the summer particularly in the south and east, a significant transformation from the situation at the start of 2018.

The Environment Agency is continuing to urge us all to think carefully about our water consumption saying the average person in England uses 140 litres per day. They published a recent report examining water resources.

“At the start of June for most areas of England, the river flows, groundwater levels and soils were normal for the time of year. This followed the rain in early spring, which helped groundwaters in the south east to recover from previously low levels. During dry spells, it is not unusual for some rivers and lakes in faster responding catchments to drop quickly, but they tend to recover quickly when the rain returns. The Environment Agency continues to work with water companies, businesses and farmers to provide advice, helping to balance the needs of water users and minimise impacts on the environment of any dry weather.”

As we look at the rest of June, the forecast shows high pressure building across the south of the UK later this week with indications this will last into next week as well – meaning dry settled conditions for the south. Further north, the weather looks more unsettled with a chance of rain or showers.

4 Responses to A warm and dry June so far