2017 saw named storms and heatwaves affect the UK, but perhaps the most memorable day was October 16 when the 30th anniversary of the 1987 Great Storm was marked by an ex-hurricane generating headlines as the sky and the sun turned red.

Here’s a brief look back at some of the UK weather highlights for 2017: The year started on a dry note with below average rainfall for the month in most areas, especially the north where well below half of the month’s average rainfall fell. It was sunny too, the 10th sunniest January across the UK in records going back to 1929

There was a cold snap between the 11th and 14th with snow for most places and, although lying snow tended to be short-lived on low ground 18cm of snow was recorded at Tulloch Bridge, Inverness-shire.

Icy conditions were a feature towards the end of the month which, combined with freezing fog, cause transport problems on the roads and airports across the south of England

The month was generally mild and unsettled with wet and windy weather sweeping northeast across the UK at regular intervals.

Storm Doris was the most notable feature of the months weather for the UK, bringing damaging winds to parts of England and Wales on the 23rd and heavy snow to parts of Scotland.

Tragically there were two reported deaths as a result of Storm Doris as it caused major travel disruption, damage to buildings and left thousands of homes and businesses without power across Wales and the southern half of England. Snow caused significant disruption in parts of central Scotland, with the M80 closed completely for a time during the morning rush hour. Mild west or south-westerly winds dominated the weather for much of March bringing generally changeable conditions, and just a couple of colder spells which brought snow to some northern areas.

Snow resulted in travel disruption around the 21st of the month, causing road accidents and closing some higher routes in northern England and Scotland. The dry weather led to a marked increase in mountain grass fires in south Wales towards the end of the month. In 24 hours Mid and West Wales Fire Service dealt with over 27 separate grass fire incidents.

A quiet month with high pressure dominating the weather for much of the time, giving a dry month in many areas.

It was the UK’s 10th driest April on records going back to 1910 with parts of south-east England, and around Lothian and Fife having less than 5 mm of rain during the month. A month of two halves, with the first half being dominated by high pressure, fine weather and easterly winds and the second half seeing a return to changeable conditions and the first of the years notable thundery spells.

It was the second warmest May on record (records back to 1910) with a UK mean temperature of 12.1 °C. There was a marked contrast in rainfall across the UK with the north and west having below average totals while the south and east were quite wet in places.

Thunderstorms between the 27th and 29th saw  Cornwall and Devon and Somerset Fire and Rescue Services reporting a number of callouts due to lightning strikes.

After a very unsettled start the UK experienced a spell of hot, sunny weather in June 2017 associated with high pressure drawing very warm air from the near-continent. The temperature exceeded 30 °C somewhere in the UK every day from 17th to 21st and the hottest day of the year was recorded at Heathrow (Greater London) on 21st when the temperature reached 34.5 °C, the UK’s highest June temperature since 1976.

Despite the heatwave it was a wet month, Scotland had its was the wettest June in a series since 1910 (157 mm) and the UK overall its sixth wettest June (113.7 mm)

A generally unsettled month with rain at times and only a few brief fine spells.

Thunderstorms and torrential downpours moved north across southern England during the evening of 18th and overnight into the 19th. The worst affected location was the village of Coverack on the eastern side of the Lizard peninsula where flash flooding damaged about 50 properties and roads became impassable. 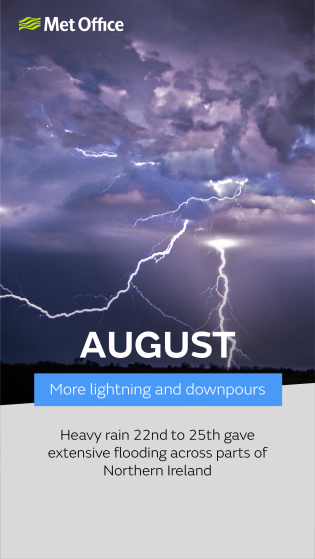 The 22nd to 25th saw heavy rain over Northern Ireland and much of northern Scotland.  There was widespread flooding across north-western parts of Northern Ireland with damage to properties and infrastructure, and over a hundred people were rescued after becoming trapped in homes and cars by overnight flooding. 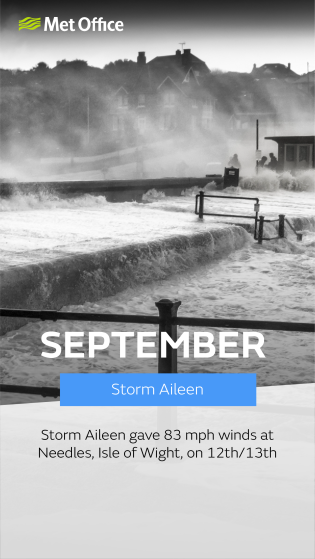 Another unsettled month with the first named storm of the 2017/18 winter season Storm Aileen passing over the UK on the 12th and 13th. The most significant September storm since ex-hurricane Katrina in 2011, Storm Aileen gave winds gusting 50 – 55 mph widely across southern England and Wales and as high as 70 mph in some exposed locations.

Aileen brought significant transport disruption to road and rail with difficult driving conditions and trains delayed or cancelled due to debris and fallen branches. Power outages were reported to have affected 60,000 homes in Wales and 7,000 homes in north-east England. A number of trees (in full leaf at this time of year) were blown over during the night.

Most of the month was dominated by warm, moist south-westerly winds, and there were some unusually high temperatures at times, notably on the 16th associated with ex-Hurricane Ophelia.  It was often cloudy, but generally dry away from the northwest with rainfall amounts in southern and eastern areas particularly small.

Ex-Hurricane Ophelia moved past the UK on the 16th bringing gusts of wind of 70 – 80 mph to western parts of the UK.  The most severe impacts were across the Republic of Ireland, where three people died from falling trees. There was also significant disruption across western parts of the UK, with power cuts affecting thousands of homes and businesses in Wales and Northern Ireland. In addition to this Ophelia draw Saharan dust and wildfire smoke from Spain and Portugal north across the UK, giving a spectacular red sky and sun. Heavy rain on 22nd saw 73.6 mm being recorded at Hazelrigg (Lancashire), making it the wettest day on record for the station.

In Glencoe, the 28th was the first official day of the new ski season with skiers flocking to the slopes following heavy snowfalls over the mountains in the preceding days.

Another unsettled month but with some markedly cold periods which lead to widespread frosts and snow.

Storm Caroline affected the UK on 7 December, bringing very strong winds and transport disruption to the north of Scotland and especially the Western and Northern Isles.

Heavy snow fell across Wales, central and southern England on 10th, with 12 cm of snow settling at High Wycombe (Bucks), and 31 cm at Sennybridge (Powys). Snowiest in lowland England since March 2013. This was the most significant snow fall in terms of depths and extent across Wales and lowland England since March 2013 and brought widespread travel disruption to air, road and rail transport. Hundreds of schools were closed on Monday 11th across England and Wales, and power cuts affected several thousands homes.