During the first half of the month, a succession of low-pressure systems tracking close to the UK brought rain to most places as fronts swept from west to east. After a cool, showery interlude around mid-month, a more autumnal pattern emerged with some foggy nights and sunny days interspersed with further bouts of rain.

Following August’s trend, provisional statistics for the UK for September so far suggest it has been slightly cooler than average and rather unsettled, although frosts have been reported by very few stations up until 28 September. The cool trend isn’t apparent everywhere though, as parts of northern Scotland, including Shetland, Orkney and Caithness were the warmest spots relatively in Britain, when compared with average temperatures. Shetland enjoyed mean temperatures during the month more than 1 °C above the long-term September average. In contrast, the maximum daily temperatures in some parts of southern England were around 1 °C cooler than the September average.

Dr Mark McCarthy is the head of the Met Office’s National Climate Information Centre. He said: “The UK receives weather influences from all points of the compass. However, the weather during September has been largely dominated by an influence from the Atlantic. This is evident in the above-average rainfall in parts of western Britain and Northern Ireland. The relative lack of northerly winds will have been partly responsible for keeping the temperatures of parts of northern Scotland above average.”

Up until 28 September, most places had already exceeded their average rainfall for the month, with a UK figure of 108.1mm with two days to go (UK September average is 96.4mm). Some locations, such as Cornwall and Plymouth, have had well above their September rainfall average.

Dr Mark McCarthy added: “Cornwall has experienced it wettest September since 2000 and there is more rain to come before the month concludes.” Other areas with well above average rainfall include parts of northwest England, northern and western Wales, Northern Ireland and northeast Scotland.

In contrast parts of southeast England, Herefordshire and Central and northwest Scotland have been rather drier. Provisional figures for Shoeburyness, in Essex, reveal that it has only received 26.8mm  of rain; just under two thirds of the long-term September average. 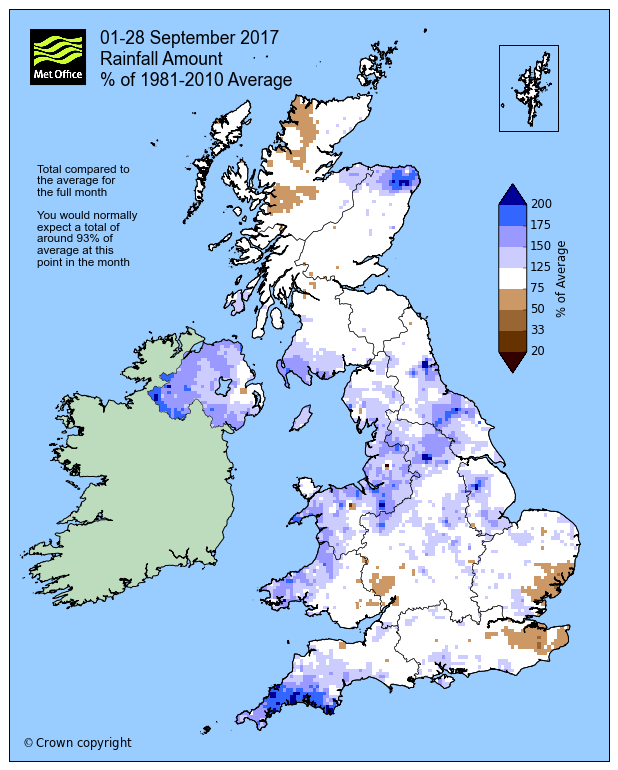 For temperatures, values have been close to or slightly below average so far, with daytime temperatures for the UK 0.5˚C below average at 16.0˚C. Some counties across southern England have had an average daytime maximum of 1˚C below normal. 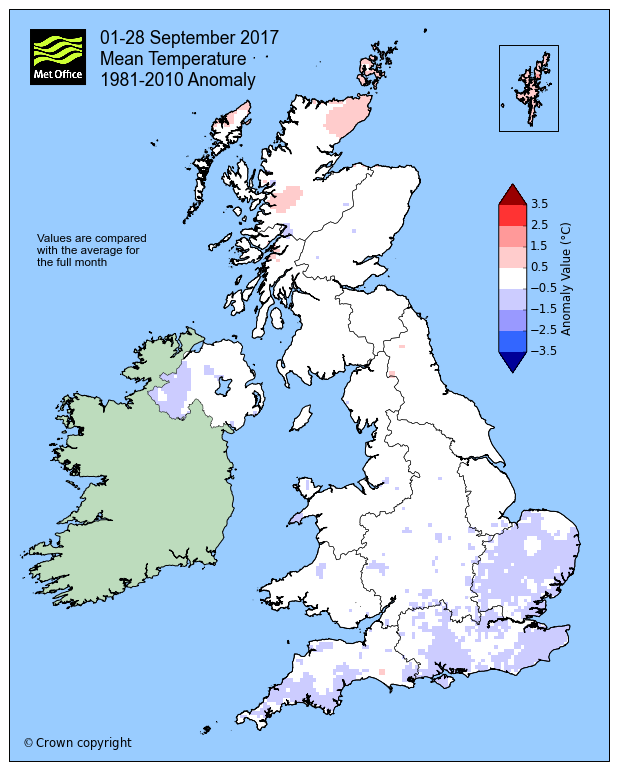 With rainfall amounts generally above average, it’s no surprise that sunshine hours are below or close to average for most areas, with the exception of parts of southeast England near the Thames Estuary. UK sunshine amounts are 102.6 hours, 82% of average (124.7 hours) up until 28 September.

The forecast for the last days of September is changeable, with some persistent and heavy rain forecast for many areas as we head into the final night of the month. This means that rainfall amounts may increase substantially for some areas, while there is unlikely to be a surge of warmth to counteract the cool feel so far.

You can keep up to date with the weather using our forecast pages, on our popular mobile app which is available for iPhone from the App store and for Android from the Google Play store and by following us on Twitter and Facebook, as well as using.

4 Responses to Atlantic depressions bring above-average rain for some