Last month the Met Office Hadley Centre celebrated its 30th anniversary. With a focus on ground-breaking science it is fitting that three Met Office scientists have been recognised in this year’s Royal Meteorological Society Awards, acknowledging their work in making exceptional contributions to weather and climate science.

The award recipients were:

This year’s Buchan Prize was awarded to Professor Adam Scaife, Principal Fellow and Head of Monthly to Decadal Prediction at the Met Office Hadley Centre.  Professor Scaife has gained international reputation as an outstanding scientist and this award recognizes his recent papers in Society journals on the dynamical mechanisms behind seasonal forecasts. 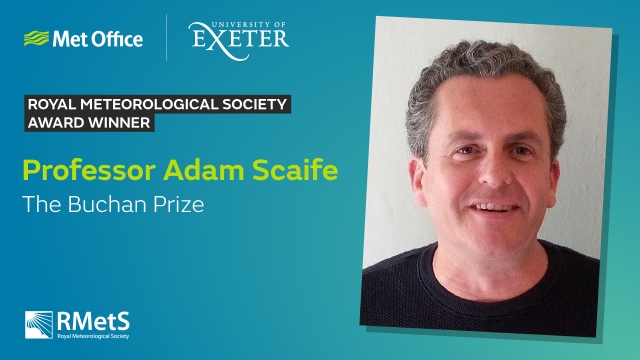 Professor Scaife said: “I’m delighted to receive the Society’s Buchan Prize and I’m deeply grateful for the acknowledgement this implies.  I’d like to thank the scientists who made and supported the nomination and also acknowledge the Met Office for giving me the opportunity to pursue a research career in atmospheric science.  Thanks also to the collaborators on my recent papers in society journals.  I’m also indebted to the members of my research group; as well as the excitement of scientific discovery, it’s the great fun I’ve had with the many inspiring, curious and interesting characters over the years that I am particularly grateful for!”

Professor Richard Betts, Head of Climate Impacts at the Met Office Hadley Centre, received the Climate Science Communications Award, recognizing both his outstanding research and his work in increasing the understanding of climate science among the public.  Professor Betts is one of the most highly-cited climate scientists and has a vital role in communicating climate science in mainstream media, social media and public-speaking at high profile events –  last year he was appointed MBE in the Queen’s Birthday Honours List for his ‘services to understanding climate change’ and he has previously hosted a ‘Climate Q&A’ at Glastonbury Festival.

Professor Betts said: “I feel honoured to have been awarded the Climate Science Communications Award of the Royal Meteorological Society for 2019 and am delighted to accept it.

“Communicating the science of climate change is as challenging as it has ever been, maybe more so. This is a vast, multi-disciplinary field with enormous implications for society, and research is being conducted within a context of growing public concern and heightened passions for climate action, along with controversy over proposed ways forward... I hope I’ve been of some help in cutting through the noise.

“I very much appreciate the trust that the Met Office and University of Exeter have shown me in allowing me to represent our organisations... I look forward to continuing the conversation!”

Met Office scientist Dr Joanne Waller was one of the recipients of this year’s L F Richardson Prize.  This prize is awarded annually to an early career member of the Society for a meritorious paper published in a Society journal.  Dr Waller received the prize for her paper that analyses a technique for observation uncertainty estimation. This article forms part of her series of innovative papers which reported significant advances in understanding and implementing new observation uncertainty techniques, resulting significant improvements in Numerical Weather Prediction forecast skill.

This year the Royal Meteorological Society will celebrate the awards digitally, showcasing each of the worthy winners on their website and social media channels throughout this week.

The full list of RMetS award recipients for 2019 can be viewed here.