Why has Summer so far been wetter than Spring?

At less than halfway through June, some parts of the UK have already had more rain than during the entire three months of spring.  Parts of North East England in particular have seen most rain so far this month, with Durham already having reached its average rainfall total for June.

Spring 2020 was the sunniest spring on record and fifth driest for the UK overall.  This was a result of the jet stream lodging itself to the north of the UK throughout much of spring, allowing high pressure and settled weather to dominate for most of the season.  Many parts of the UK had less than 50% of their average spring rainfall and England had its driest May since records began.

However, from early June this ‘blocking high’ gradually broke down, allowing Atlantic weather systems to once again bring unsettled weather across the UK. Since then low pressure has prevailed, with spells of heavy rain and heavy showers for many, triggering a Met Office rain warning in places. 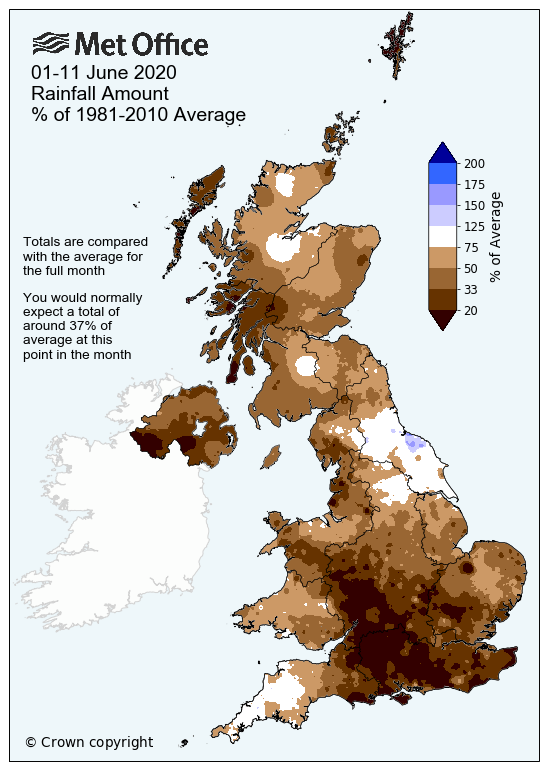 Where has been wettest so far this month?

Parts of north-east England have been especially wet – Loftus in North Yorkshire had 80.6mm of rain in the first 12 days of June, compared with just 32mm during the months of March, April and May combined.  On 11th June Loftus recorded 41.2mm of rain – this is more rain in one day than it received during the entire spring season.

Other locations that have been wetter in June so far than Spring include:

Other counties, such as Cornwall and North Yorkshire, are approaching their average June total rainfall.

What does this mean for the rest of Summer?

Although it’s too early to determine what weather we can expect for the rest of summer, the second half of June looks to remain changeable, with a mix of sunny spells and scattered showers, these heavy and thundery at times.  The best of the drier and sunnier weather will most likely be across northwestern parts of the UK, with temperatures on the warm side for most.  Check out our long-range forecast for more details.