Satellite observations, which started in 1979, show Arctic sea ice extent has declined in all seasons – with the largest losses in summer. Arctic sea ice extent at the September summer minimum has declined at an average rate of almost 12% per decade since satellite records began in 1979. This equates to an average loss each year of over 87,000 square kilometres – an area greater than Scotland, or more than four times the size of Wales.

Satellite observations, which began in 1979, show #Arctic sea ice extent has declined in all seasons. At the September summer minimum it had declined at an average rate of 12% per decade. This equates to an average loss each year of over 87,000 km2 – an area larger than Scotland.

Now a new study involving an international team of scientists, led by the University of Hamburg and including the Met Office Hadley Centre, shows the potential for significant further stress on summer sea-ice in the Arctic.

The study, published in the journal Geophysical Research Letters, uses results from the latest generation of climate models (known collectively as CMIP6). When these models are compared, the authors have shown that the majority of models project ice-free summers before 2050, almost completely irrespective of the future scenario of greenhouse gas emissions. For the purpose of climate studies the Arctic Ocean is said to be “ice-free” when the sea ice extent falls below one million square kilometres. As a comparison, the 1981-2010 long-term September average from our HadISST.2.2.0.0 dataset is 7.27 million square kilometres.

Dr Ed Blockley is the lead for the Met Office Polar Climate programme and an author on the paper. He said: “The Arctic has already proved vulnerable to climate change and it is already one of the regions on Earth showing the most rapid warming.

“The findings in our latest study provide further concern about the increasing vulnerability of the Arctic to climate change. Alarmingly the models used in the study repeatedly show the potential for ice-free summers in the Arctic Ocean to occur before 2050, almost irrespective of the measures taken to mitigate the effects of climate change. However, the study shows that the scenarios displaying the greatest cuts in greenhouse gas emissions have the least likelihood of the creation of ice-free summers, but the signal is there in all possible futures – this was unexpected and is extremely worrying.” 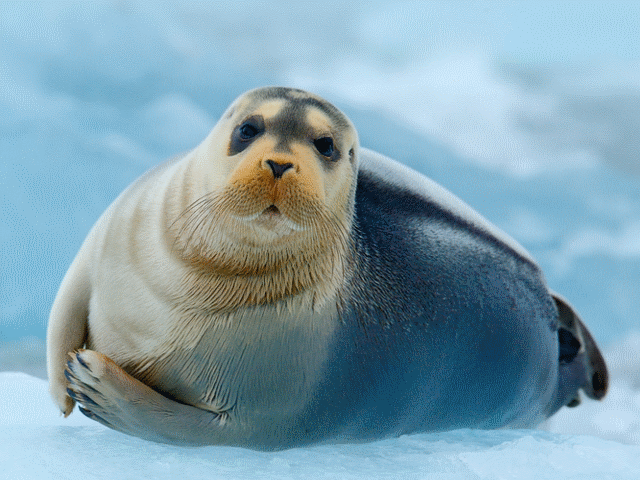 Many species, like this bearded seal, depend on summer sea ice in the Arctic. Projections show that in some years Arctic sea ice could disappear in summer, even under lower emissions scenarios. Higher emission scenarios are likely to lead to even more years with summer sea ice loss.

Currently, the North Pole is covered by sea ice year-round. Each summer, the area of the sea ice cover decreases, in winter it grows again. In response to ongoing global warming, the overall area of the Arctic Ocean that is covered by sea ice has rapidly been reduced over the past few decades. This substantially affects the Arctic ecosystem and climate: The sea-ice cover is a hunting ground and habitat for polar bears and seals, and keeps the Arctic cool by reflecting sunlight.

Met Office Chief Scientist Stephen Belcher , said: “The science is progressively informing us that climate change is likely to have increasingly significant impacts on our world. How often the Arctic Ocean will be seasonally ice-free in future critically depends on future CO2 emissions. If emissions are reduced rapidly, ice-free years are expected to occur less frequently. With higher emissions, the Arctic Ocean will become ice free in most years.”

The study involved 21 research institutes from around the world, and was coordinated by Dr Dirk Notz from the University of Hamburg, Germany, through the international SIMIP (Sea Ice Model Inter-comparison Project) community.