A cool and wet June so far after a warm start

June 2019 got off to a false start – despite a warm first few days, the rest of the month so far has been much cooler and rather wet.

The UK has been stuck under an area of low pressure for most of the month so far, bringing a succession of slow-moving weather fronts and heavy rain.

For most days, the maximum temperature has been well below the UK June average of 17.3 Celsius, with the UK average maximum 15.5 C as of 13 June.  Temperatures across the UK were widely below average on 11 June in particular, with much of central Wales struggling to reach 10 C. 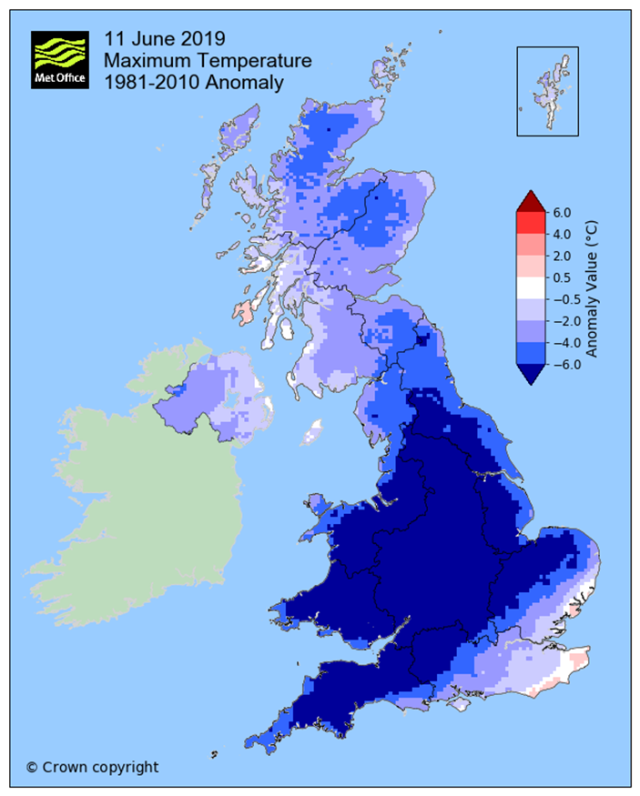 At almost halfway through the month, England and Wales have already reached their average monthly rainfall totals for June, with 127% of the expected rainfall recorded in England and 120% in Wales.  The wettest June on record for the UK is 2012, where the country received more than double (203%) of average rainfall for the month.

Monday 10th and Tuesday 11th were particularly wet days, especially in the east and southeast England and northeast Wales, where some places recorded almost two month’s worth of rain in one day.

Flintshire in northeast Wales is the wettest region so far this month, receiving 140.5 mm (225%) of its average June rainfall.  This is followed closely by Lincolnshire, which recorded 111.2mm, or 198% of June average rainfall. .

The map below shows the rainfall so far this month as a percentage of the June average. The dark blue areas are those that have already received more than twice their normal June rainfall. In contrast Scotland has received just over half its normal June rainfall in the first half of the month so is much closer to what we might expect for this point in the month. 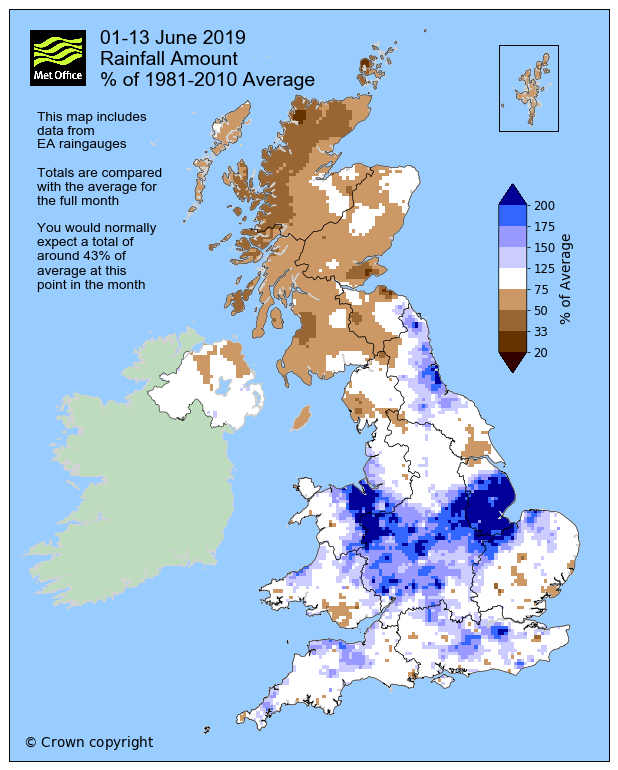 The Met Office issued a series of National Severe Weather Warnings for heavy rain and thunderstorms during this period, with amber rain warnings for London, southeast England and southeast Scotland. The Environment Agency issued numerous flood warnings and alerts, with significant flooding in Lincolnshire where over 100 properties were flooded and disruption to transport including railway lines.

Why the wet weather?

The unsettled weather and heavy rain is a result of an omega blocking pattern, with low pressure in the western Atlantic, high pressure in the mid-Atlantic and low pressure in the east Atlantic.  The UK has been stuck under this latter area of low pressure, allowing weather fronts to continually feed across the UK from the east.   Heavy showers and thunderstorms also developed in this set up, adding to the already high rainfall totals.

Not everywhere has been very wet however, as western parts of Northern Ireland and Scotland have been shielded from the worst of the heavy rain. 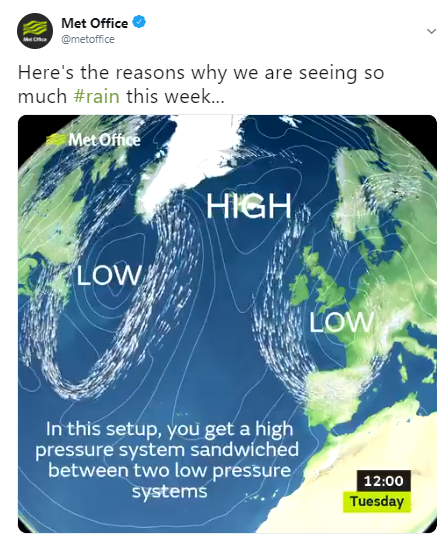