A strong storm developing in the Mediterranean Sea, frequently referred to as a ‘medicane’, has been making the news in the last couple of days, but what exactly is a ‘medicane’?

How is it defined?

There is actually no official meteorological definition of the term ‘medicane’, but it is often used to describe a deep area of low pressure which forms in the Mediterranean Sea and acquires characteristics of a tropical cyclone and sometimes has the appearance of a hurricane. Tropical cyclones are distinct from low pressure areas which form at higher latitudes in that: they derive their energy from the warm ocean surface; do not have warm and cold fronts associated with them; and have their strongest winds and most intense storm activity close to their centre. 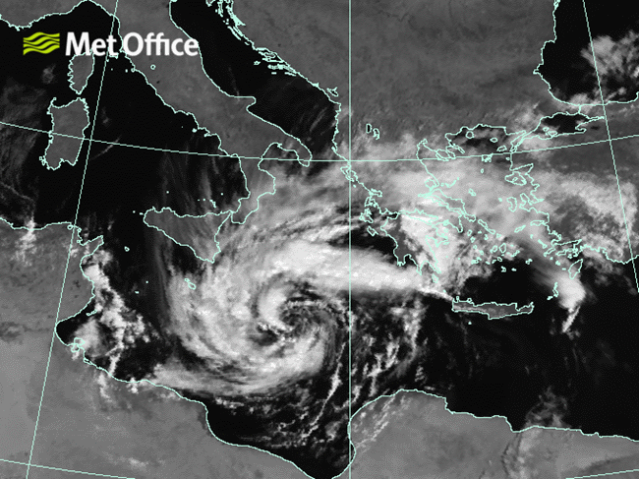 Julian Heming is a tropical cyclone expert at the Met Office. He said: “The current storm over the Mediterranean Sea formed from the clash of cold air pushing south over the Balkans and warm air moving north from Africa and so was initially not considered a ‘tropical’ storm. However, as it has strengthened over the warm waters of the Mediterranean Sea it is starting to acquire some characteristics of a tropical cyclone. Bands of thunderstorms are starting to wrap around the low pressure centre, although are not yet concentrated close to the centre as you might see in a fully ‘tropical’ cyclone.”

How unusual is it?

Storms in the Mediterranean Sea which exhibit some characteristics of a tropical cyclone are not particularly rare. The last example, in November 2017, produced flash flooding over parts of Greece. Similar storms also occurred in 2016 and 2014 bringing strong winds and heavy rain to Crete and Malta respectively.

Does it have a name?

Tropical cyclones are named by designated regional warning centres around the globe. Whilst the US National Hurricane Center decides when to name tropical cyclones in the Atlantic, its jurisdiction does not cover the Mediterranean Sea, so there is no official list of names for storms with tropical characteristics in this region. However, various names have been colloquially applied to the current storm in the Mediterranean Sea.

What will its impacts be?

Paul Hutcheon is a deputy chief meteorologist at the Met Office. He said: “Regardless of its definition, the storm in the Mediterranean Sea is expected to bring some major impacts to parts of southern Europe over the weekend.

“This deep area of low pressure is already producing storm force winds across parts of the Central Mediterranean, with these winds building very rough seas that could impact marine transport.

“During the weekend the storm will move east across southern Greece and into western Turkey, although the winds will slowly ease as the storm weakens. However, strong winds are still likely to affect parts of Greece, with very heavy rainfall expected from thunderstorms affecting Greece and western Turkey.

“The rainfall could result in flash flooding and landslides across parts of Greece and western Turkey this weekend, with frequent lightning expected within the thunderstorm activity.”

The animation above – produced on 28 September 2018 – shows the expected evolution of the medicane weather system. Follow our Twitter feeds @metoffice and @metofficestorms for more information on the Mediterranean storm and tropical cyclones currently active worldwide.