Climate models have come under scrutiny. Stephen Belcher, the Met Office’s Chief Scientist, explains the nuances of the science and why it is imperative now to reduce atmospheric carbon.

This question has been a hotly debated this week. Whilst climate models do not represent all aspects of our climate, they provide an essential tool for guiding policy by simulating the warming we have seen since the pre-industrial era. So how well do they do?

The figure below shows observations of global warming (in black) compared to the range projected by the group of models submitted to CMIP5, which was used by the IPCC for their latest assessment report on climate change. The 1880-1919 period was chosen here to represent pre-industrial temperatures so that three observational data sets could be used in the comparison. The observations lie comfortably within the modelled range. For example, the warming seen between the 1880-1919 period and 2016 is 1.10oC in HadCRUT4, 1.19 oC in GISTEMP and 1.12 oC in NOAAGlobalTemp, which compares well with 1.14 oC, the average of the CMIP5 models (which have a 2.5 – 97.5% range of 0.70 – 1.58 oC). 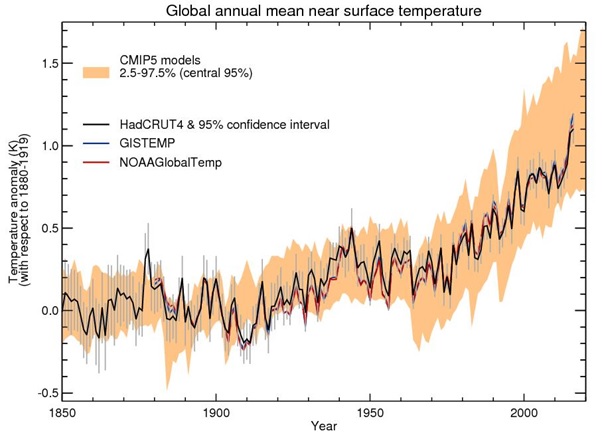 Comparison of simulated temperatures from CMIP5 models (historical and RCP4.5 experiments) with three observed near-surface temperature datasets, as changes from the 1880-1919 baseline. The observational datasets are HadCRUT4 (with an estimate of the uncertainty on the dataset) produced by the Met Office Hadley Centre and the Climate Research Unit; GISTEMP produced by NASS GISS; and NOAAGlobalTemp produced by NOAA. The model and observational data have been re-analysed to the same coverage as HadCRUT4 to enable fair comparison.

What factors need to be considered in making comparisons between observed and modelled warming?

First, during the so-called slowdown during the 2000s the observations sit within the lower half of the model range. This has prompted questions about whether the models have been warming too much. Analysis at the Met Office shows that these variations are consistent with variations associated with the Pacific Decadal Oscillation. We have since seen record-breaking temperatures in 2014, 2015 and 2016 which signal an end to the slowdown and a return of higher warmer rates.

Second, the CMIP5 simulations were initiated in 2005, and emissions of greenhouse gases from 2005 onwards were assessed, based on estimates for socio-economic development. So the CMIP5 simulations do not account for the cooling effects of small volcanic eruptions which recent research shows slightly cools the modelled warming. (Further information on these topics can be found in Ed Hawkins’ blog, and in the Nature journal paper by Medhaug et al)

So can we limit warming to the ambitions of the Paris agreement?

Policy makers need to have reliable information about greenhouse gas emissions because there is a direct link between the amounts of total CO2 we have emitted and the amount our world warms. By studying this link, it is possible to estimate how much more carbon we can emit while remaining within given levels of warming. There is currently an intense research effort to reduce the current uncertainties in the carbon budget.

One recent study has suggested that remaining carbon budgets may be larger than previously thought. (The close agreement between the models and the observations in the figure above does not change this conclusion.) Meanwhile other areas of research suggest they may be smaller. For example, the next generation of climate models will include processes such as the impacts of thawing permafrost, changes to wetlands, and the impact of the nitrogen cycle on plant growth. Early evidence suggests that accounting for these processes will reduce the amount of carbon we can emit while staying within the over all budget and the global warming targets.

The Paris Agreement to limit warming to ‘well below 2 oC above pre-industrial levels and to pursue efforts to limit the temperature increase even further to 1.5 °C’ is driving a need for greater precision in climate science, both in the need to assess warming above pre-industrial levels, and in the need to assess carbon budgets consistent with these targets.

What remains clear, however, is that the aim of limiting warming to 1.5C remains a huge global challenge that requires rapid cuts to greenhouse gas emissions.

5 Responses to Climate models: an essential tool for guiding policy