Cyclone Debbie made landfall over the coast of Queensland, Australia in the early hours of this morning UK time bringing high winds, storm surge and heavy rain. Queensland is no stranger to strong cyclones having been struck by Cyclones Marcia and Nathan in 2015, Cyclone Ita in 2014 and Cyclone Yasi in 2011.

Debbie formed late last week in the Coral Sea and was the first cyclone to form close to the eastern side of Australia in what has been a very quiet season across the southern hemisphere as a whole. Debbie strengthened throughout the day yesterday as it started to move across the Whitsunday Islands. When just a little distance offshore, the cyclone’s forward motion slowed resulting in many hours of extremely strong winds over some of the islands.

The observing station at Hamilton Island experienced sustained winds of hurricane force (74 mph or greater) for almost 12 hours and a peak wind gust of 163 mph. This location was extremely exposed to the strong winds on the southern flank of the cyclone and as Debbie came ashore over mainland Queensland winds were not as strong as this, although from reports being received were still very damaging. 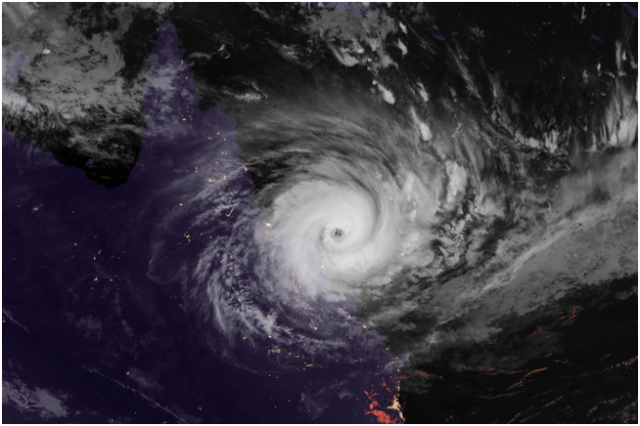 Cyclone Debbie made landfall near the small town of Airlie Beach and is now slowly moving inland and starting to weaken. Many locations in the cyclone’s path have so far received 150-200 mm rain. Although the threat from wind will continue to recede, Debbie is likely to pose a continuing threat from rain for several days to come as it weakens into a tropical low pressure system.

The latest forecast track turns Debbie sharply south and then south-east, with the remnant low pressure area tracking back towards the coast and passing over Brisbane before heading back out to sea. Rainfall totals of 250 mm are expected widely along Debbie’s path with higher totals in some locations. This is likely to lead to river flooding in many areas of south-east Queensland over the next few days. 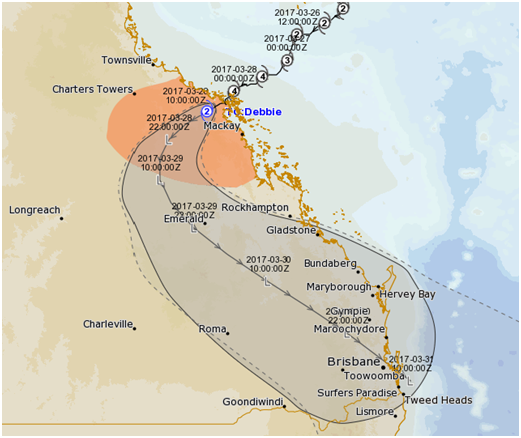 Official warnings for the latest tropical cyclones in the Australian region are issued by the Bureau of Meteorology. The Met Office routinely supplies predictions of cyclone tracks from its global forecast model to regional meteorological centres worldwide, which are used along with guidance from other models in the production of forecasts and guidance. We also provide updates on current tropical storms via @metofficestorms on Twitter.