Will you see the Aurora borealis this week?

Over the past few nights, clear skies have allowed skygazers in some parts of the UK to see the Aurora borealis (or Northern Lights). In particular, northern parts of Scotland have been treated to some stunning displays.

And there it was once again, The Aurora Borealis Dancing Through The sky. pic.twitter.com/XiAWpv6P4C

During autumn and spring the chances of seeing this phenomenon is increased due, in part, to the angle of the magnetic poles in conjunction with the magnetic orientation of the solar wind. This results in enhanced geomagnetic activity, leading to increased chance of seeing aurora in the UK compared with winter and summer.

There is an additional factor leading to an increase in the chance of seeing the Northern Lights at the moment.

The Sun goes through an 11 year solar cycle, from solar minimum, through solar maximum and back to solar minimum. We are now in the declining phase of the solar cycle following the solar max which occurred in early 2014. During the current phase of the solar cycle coronal holes that begin the cycle in the Sun’s ‘polar’ regions have now migrated towards the Sun’s equator, meaning they are on a similar line of latitude to the Earth (i.e. facing the planet rather than directed north and south out of the solar system). These coronal holes give rise to high speed solar wind streams that buffet the Earth, disturbing its magnetic field.

In other parts of the solar cycle these disturbances are largely as a result of coronal mass ejections, which can give larger magnitude disturbances than these high speed streams.

In late September 2016 a coronal hole led to the Aurora borealis being seen as far south as Lancashire along the northern horizon. This same hole has since rotated 360 degrees around the sun and is now in a similar position but has grown in size. The dark area on the images below show this coronal hole from late September and today (26 October 2016). 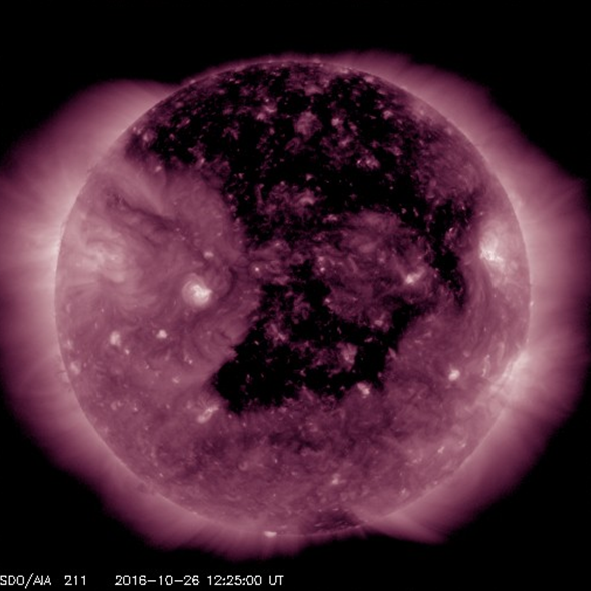 The strength of the disturbance directly relates to how far south the aurora is visible (or how far north if you are in the southern hemisphere), and of course you need clear skies to see it.

Assuming clear, dark skies, the aurora should be visible with the naked eye on the northern horizon from much of Scotland and Northern Ireland and possibly into northern England. Parts of Aberdeenshire may have the best chance of viewing the displays this week, with clearer skies than further west. Further south across the UK it may be possible to capture pictures of the aurora while facing the northern horizon with the use of long exposures on cameras.

Keep an eye on our space weather forecasts here and follow us on Twitter @MetOfficeSpace, if there’s a chance of seeing the aurora in the UK we’ll let you know.

The Met Office works closely with the British Geological Survey in Edinburgh to forecast these geomagnetic events and the BGS website provides to the minute information on the current activity levels as well as ‘Tips on viewing the aurora’. The BGS website includes a display of the aurora forecast model which is run by the NOAA Space Weather Prediction Centre, we are working on implementing this model at the Met Office.

Let’s hope for clear skies and plenty of beautiful displays – if you are one of the lucky ones let the scientists know by tweeting about it on Geosocial aurora.

4 Responses to Will you see the Aurora borealis this week?