Climate change is a globally complex issue and there are genuine areas of uncertainty and scientific controversy.  However with an increase in record temperatures, the melting of Arctic ice and a rise in CO2 there is little doubt our climate is changing.

Among the profound impacts of climate change now being investigated is its affect on ecosystems around the globe and the fact the world appears to be getting greener.

These issues, including carbon accumulation in vegetation, have been widely discussed in the scientific literature and official reports.

The Met Office’s Professor Richard Betts looks at the coverage of this in the IPCC 5th Assessment Report.

A recent paper (Zhu et al, 2016), attributed the observed worldwide greening of vegetation largely to the fertilisation effects of increased carbon dioxide. This paper was published after the IPCC 5th Assessment Report (AR5), but had the issue already been discussed in AR5? Yes – quite prominently and extensively.

The Summary for Policymakers (SPM) of the Working Group 2 volume on Impacts, Adaptation and Vulnerability features observed land ecosystem changes prominently. The first figure of results in the SPM (reproduced below) gives an overview of observed impacts of climate change, including a number of examples of terrestrial (ie: land) ecosystem changes.

The table accompanying that figure explains each of the impacts depicted on the map.  Many of these clearly relate to observed greening across the world. 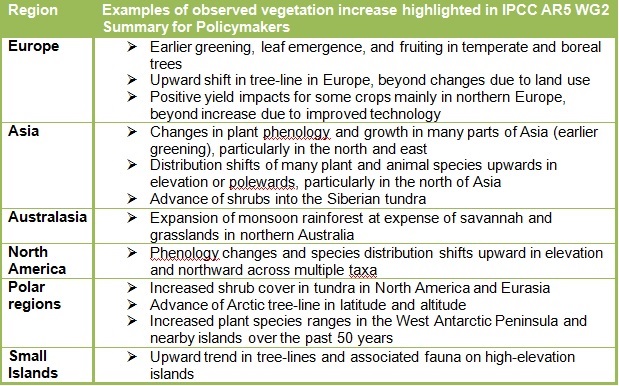 As well as being highlighted in the SPM, these changes and the processes behind them – including carbon dioxide fertilisation – are also discussed in several chapters of the main report. This includes the chapters on Terrestrial and Inland Water Systems (Chapter 4); Food Security and Food Production (Chapter 7); Detection and Attribution of Observed Impacts (Chapter 18); and most of the chapters on individual regions (Chapters 21-30). Some examples include:

In summary, there is high confidence that net terrestrial ecosystem productivity at the global scale has increased relative to the pre-industrial era. There is low confidence in attribution of these trends to climate change. Most studies speculate that rising CO2 concentrations are contributing to this trend through stimulation of photosynthesis, but there is no clear, consistent signal of a climate change contribution – Chapter 4.

The final draft of the main report was released on the same day as the SPM.

The issue of land carbon uptake and increased biomass were also discussed in the Working Group 1 volume on The Physical Science Basis, both in that volume’s SPM and the chapter on Carbon and Other Biogeochemical Cycles.

Recent suggestions that this issue was downplayed in IPCC AR5 are therefore incorrect and misleading.