Latest News on Hurricane Matthew and other Tropical Cyclones

Hurricane Matthew’s passage across Cuba and Hispaniola resulted in some weakening, although it retained its status as a ‘major’ (category 3 or greater) hurricane, which it has now held for almost six days. No other Atlantic hurricane in the month of October has been a major hurricane as long as this since 1963.

Matthew is now moving through the Bahamas and is strengthening again. Sustained winds are currently near 125 mph and the hurricane is on the cusp of regaining category 4 status on the Saffir-Simpson Hurricane Wind Scale. On its current track the eye of Matthew will pass over or just to the west of Nassau, the capital of the Bahamas in the next few hours. This is likely to cause severe wind damage and a storm surge of up to 4.5 metres is possible.

Next in line for Matthew’s fury is Florida on Friday. The eye of the hurricane is expected to track along or very close to the east coast resulting in extreme winds, storm surge and heavy rain. It is possible that the eye will stay just offshore, which would mean that Matthew does not technically make landfall. However, the impacts are still likely to be severe for coastal regions even if this happens.

In the longer range Matthew will head towards Georgia and South Carolina, but is then expected to turn east and drift out to sea. There is high uncertainty in the movement of Matthew early next week. It may stay out at sea and slowly weaken, but there is a possibility that it will make a clockwise loop and head towards Florida or the Bahamas again. It will be a day or two before forecasts this far ahead become more certain.

Given the likelihood that Matthew will stay in the western Atlantic close to the USA for many days to come and a blocking area of high pressure over northern Europe is dominating the UK’s weather at present, Matthew is not likely to have any impact on the UK weather. 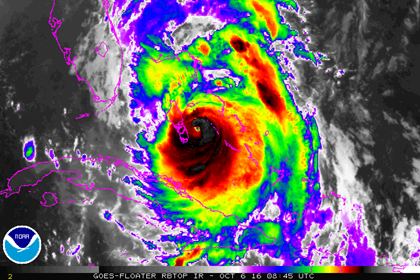 Hurricane Matthew just south of Nassau in the Bahamas on 6 October 2016 (credit: NOAA)

Tropical Storm Nicole is lurking to the east of Hurricane Matthew in the open waters of the Atlantic. It is currently just below hurricane strength. Although Nicole does not immediately threaten any land areas, the storm could play an important role in determining the track of Matthew next week. The two storms may interact and either rotate around each other or Nicole could be absorbed into Matthew. Alternatively the two could remain sufficiently far apart to not interact. At the moment either of these scenarios is possible.

Elsewhere in the world

Tropical Storm Aere has formed just to the north of the Philippines and is moving westwards into the South China Sea. Although weak at the moment, Aere could become a typhoon and threaten parts of southern China including Hong Kong and Hainan Island. 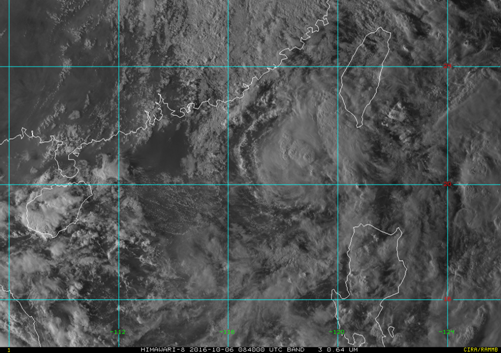 Finally, a subtropical storm named Bransby has developed in the south Indian Ocean to the south of Madagascar. It is not forecast to affect any land areas as it moves south-eastwards in the next few days.

Official warnings for the latest tropical cyclones in the North Atlantic are issued by the US National Hurricane Center. In the western North Pacific warnings are issued by the Japan Meteorological Agency. The Met Office routinely supplies predictions of cyclone tracks from its global forecast model to regional meteorological centres worldwide, which are used along with guidance from other models in the production of forecasts and guidance. We also provide updates on current tropical storms via @metofficestorms on Twitter.