Matthew is now expected to turn north-west and track through the Bahamas today and Thursday. Matthew may strengthen as it moves over very warm water. A storm surge of two to three metres is expected widely, with four metres possible in some locations.

Hurricane warnings and watches are in effect for much of the east coast of Florida. It is likely the eye of Hurricane Matthew will pass very close to the entire eastern coastline of the US state on Friday. Whether Matthew actually makes landfall is uncertain, but this cannot be ruled out. Even without landfall, strong winds, heavy rain and storm surges are expected. The last major hurricane (Category 3 or stronger) to make landfall over the US coast was Wilma in 2005.

Over the weekend it is expected that Matthew will weaken and turn north and northeast and affect the coastal areas of Georgia and the Carolinas. However, this is the point at which uncertainty grows in forecasts. It is looking increasingly likely that later in the weekend Matthew will turn out to sea, but the timing of this cannot be stated with certainty. Thus it is unclear how far north along the US coast will see impacts from Matthew. 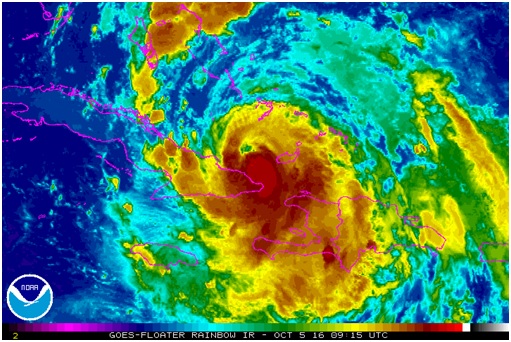 Yesterday Tropical Storm Nicole formed in the open ocean of the Atlantic well to the north of the Leeward Islands. At this stage Nicole is not expected to strengthen rapidly and is likely to meander for several days without affecting land. Initially, no interaction with Hurricane Matthew is expected, but it is possible that in the longer term there may be some interaction. How this affects the track of each storm is uncertain at this time.

Typhoon Chaba passed over the Korean Island of Jeju yesterday bringing near to 250mm rain. It has now weakened to a tropical storm and is racing north-eastwards, just north of Japan. It is sparking heavy showers and some longer spells of rain, but no significant impacts are expected.

Also in the western North Pacific, a tropical depression has formed to the north-east of the Philippines. This could become a tropical storm as it moves westwards through the Luzon Strait. It is likely to track into the South China Sea and could threaten southern coastal areas of China, but the detail of any landfall is uncertain at present.

A tropical depression seen north-east of the Philippines on 5 October 2016. (credit: NOAA)

Official warnings for the latest tropical cyclones in the western North Pacific are produced by the Japan Meteorological Agency. North Atlantic warnings are issued by the US National Hurricane Center.

The Met Office routinely supplies predictions of cyclone tracks from its global forecast model to regional meteorological centres worldwide, which are used along with guidance from other models in the production of forecasts and guidance. We also provide updates on current tropical storms via @metofficestorms on Twitter.