Mostly dry for August so far after a wet start

Provisional mid-month stats are in for August and they show that through the first 16 days there has been quite a contrast in rainfall across the UK.

After the first day of the month, when an area of low pressure gave some large rainfall totals in the south, England, Wales and Northern Ireland have been much drier than average. By this stage in the month you would normally expect around 52% of the total month’s average to have fallen. However, many parts have seen less than 20%, with Anglesey only recording 5.6mm which is just 7% of the total month average.

Meanwhile Scotland has been affected by a number of frontal systems, particularly in the north and west, so it has been much wetter here. Many northwestern parts have already reached close to their total month average, as have the Lake District and the northern Pennines. 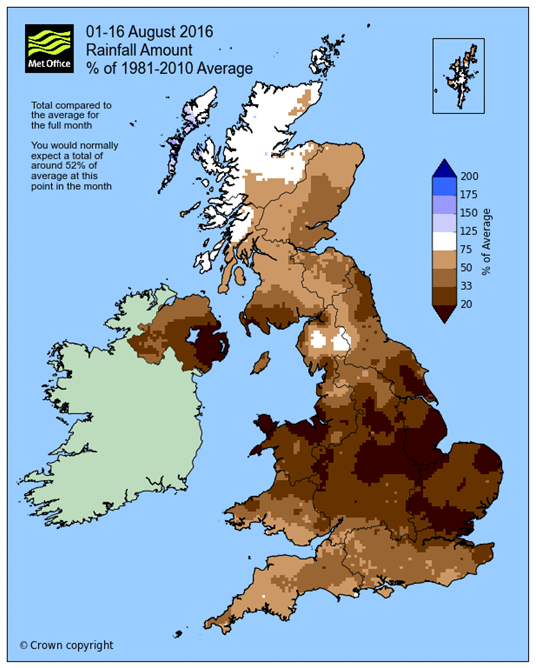 Temperatures have generally been around normal although maximum temperatures are a little above average towards the east coast and slightly below in the west. Looking at sunshine amounts, it has been quite bright for most, but less so in Northern Ireland and Scotland.

After some warm and sunny weather to start this week the forecast is for things to turn much more unsettled for Friday and the weekend, with the potential for a warming trend next week. Thereafter the rest of the month looks likely to be changeable with wetter weather in the northwest and drier in the southeast.

You can keep up to date with the weather using our forecast pages and by following us on Twitter and Facebook, as well as using new mobile app which is available for iPhone from the App store and for Android from the Google Play store.