Southern Asia has seen some extreme weather recently, with heavy rainfall and high temperatures. But how unusual is this?

In the last few days temperatures have often been above 50 C in northwest India, and the highest ever temperature record  was broken with 51 C at Phalodi.  Meanwhile Jacobabad in Pakistan has recorded four consecutive days of over 50 C since Thursday.

There was also a Tropical Cyclone (Roanu) progressing northeastwards along the east Indian coast across Bangladesh and Myanmar through the weekend. This has now dissipated over land but has drawn a lot of moisture up across the Bay of Bengal which is bringing enhanced rainfall on the east coast (northwest Thailand and south Myanmar in particular). 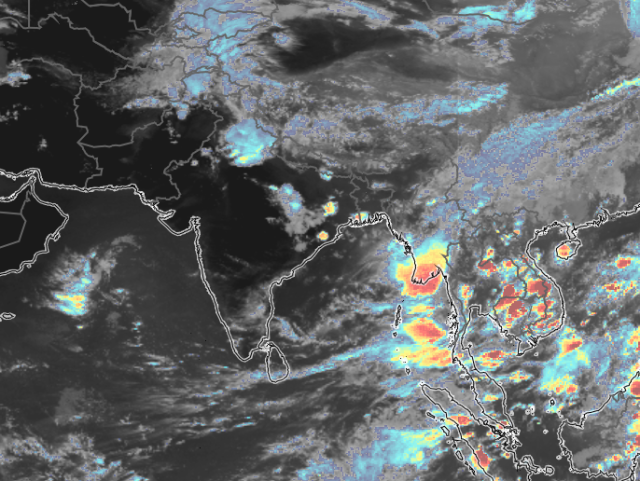 Infrared imagery showing southerm Asia at 1200 GMT Monday 23 May 2016. The colour enhanced areas show where the greatest activity is.

May is known as the Pre-Monsoon period in this part of the world. Isolated thunderstorms, strong sunshine and extreme heat across the Indian plains, are quite normal as the sun climbs higher in the sky. However, this year the heat has been exacerbated by dry soil conditions across much of northwest India and Pakistan following two relatively poor summer monsoon seasons. By June the moist, cloudy winds from the southwest will have set in across India and temperatures will fall, although with higher humidity it will continue to feel uncomfortable.

With relatively light upper and surface winds and high sea temperatures the environment in May is conducive to the development of Tropical Storms in both the Arabian Sea and the Bay of Bengal. By June, formation of Tropical Cyclones is unlikely due to increased wind shear, with strong westerly winds near the surface and easterly winds higher up.

You can keep up to date on storms around the world on our Storm Tracker page. For regular updates on tropical cyclones worldwide follow @metofficestorms on Twitter.

If you are looking for a forecast closer to home you can keep up to date with the latest information on our forecast pages, Facebook and Twitter sites and via our Weather App.