Cyclone Winston leaves a trail of destruction in Fiji

Our blog on Friday 19 February reported the potential threat to Fiji from powerful Cyclone Winston. As predicted, the cyclone crossed the islands causing much destruction from exceptionally strong winds and heavy rain.

Late on Friday (UK time) Cyclone Winston crossed directly over the smaller Fijian islands of Vanua Balavu and Koro. At this stage, Winston was still strengthening and peaked with sustained winds averaged over 10-minutes estimated to be near 145 mph and gusts up to 200 mph. An observing station on the island of Vanua Levu recorded sustained winds of 121 mph on the northern side of the eye, which in this instance would have been the weaker side of the cyclone. Winston briefly made landfall on the northern coast of Fiji’s largest island Viti Levu before moving back out to sea. The country’s capital Suva is located on the southern coast, so received some shelter and did not experience the strongest winds. Available data indicates that Winston was the strongest cyclone on record to make landfall over the main island of Fiji and amongst the strongest on record in the whole southern hemisphere.

Reports are starting to emerge of severe destruction of property in communities located directly in the path of the cyclone and some loss of life. Relief agencies have been mobilised to provide aid and the New Zealand Air Force has been flying missions in the area to provide a picture of the damage in some of the more remote locations. 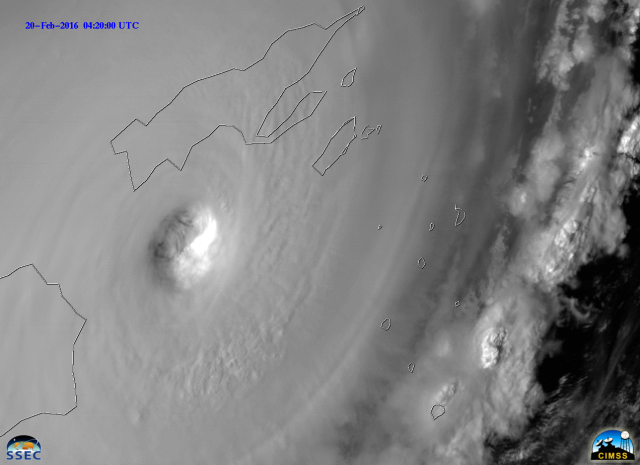 Cyclone Winston at 0420 UTC on 20 February 2016
Image courtesy of the CIMSS/SSEC, University of Wisconsin-Madison

Since leaving the shores of Fiji, Cyclone Winston has continued moving west and weakened, although is still a strong cyclone. Although there was a possibility that Winston could threaten Vanuatu, the cyclone is now starting to turn away from the islands and head initially south-east then south-west moving over open ocean for the next few days. The longer term forecasts from the Met Office ensemble forecasting system indicates that the post-tropical remnant of Cyclone Winston could pass over the North Island of New Zealand at the weekend. However, by then it would be much weakened and just bring a spell of wet and windy weather with no exceptional impacts, like those experienced on Fiji, expected. 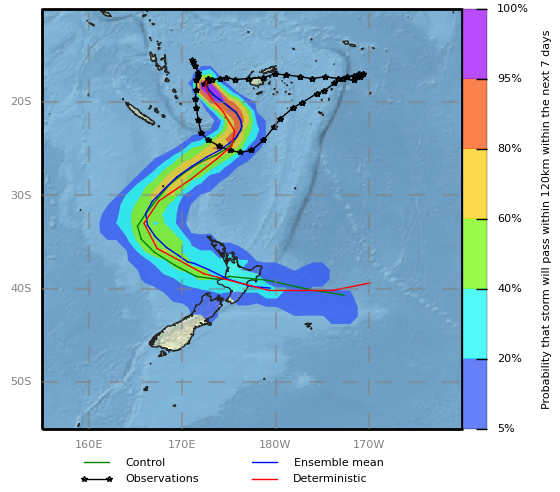 Official warnings for the tropical cyclones in the South Pacific are produced by the Fiji Meteorological Service. The Met Office routinely supplies predictions of cyclone tracks from its global forecast model to regional meteorological centres worldwide, which are used along with guidance from other models in the production of forecasts and guidance. We also provide updates on current tropical storms via @metofficestorms on Twitter.