It will turn cold as we head into the weekend, courtesy of an arctic maritime airmass spreading across the country from the north. Yellow ‘be aware’ National Severe Weather Warnings have been issued for a risk of impacts as a result of both snow and wind. Keep up to date with the weather for your area using our forecast pages.

Cold air spreading southwards during Friday will result in showers turning to snow over high ground in the north of the UK and increasingly to lower levels towards Friday evening as an area of rain, sleet and snow moves southwards. Northern and eastern Scotland and perhaps the northeast of England could see accumulations of 1-4cm in places at low levels, whereas above around 150m 5-10cm could accumulate.

Other areas of the UK could see some snow Friday night into Saturday as the band of rain, sleet and snow transfers southwards with perhaps some small amounts of settling snow over high ground.

The combination of rain, sleet and snow and dropping temperatures will also lead to a risk of ice in places, particularly over high level routes on Saturday morning.

Strong to gale force north or northwesterly winds are also likely Friday night and Saturday which will enhance the cold feel in what will be the coldest air of the season so far. There is a risk of severe gales with gusts of 60-70mph for a time in the most exposed locations over higher routes and along the east and west coasts of the UK.

On Saturday, wintry showers will become confined to parts of Scotland and to eastern and western coastal counties with plenty of sunshine elsewhere. It will feel cold in marked contrast to the recent mild weather and the second mildest start to November on record. Maximum temperatures by day will be 3-7 degrees Celsius but the wind will make it feel much colder. Overnight, minimum temperatures are likely to drop below freezing away from coasts, to give widespread frosts, with the risk of some icy patches where showers have fallen during the day. 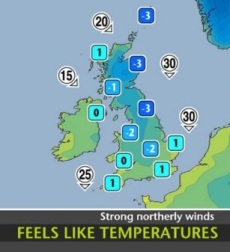 Chief Operational Meteorologist Frank Saunders said: “The Met Office is forecasting strong winds and some snow for this weekend which means there is the likelihood of some difficult driving conditions and possible disruption to transport. With this in mind, if you have travel plans over the weekend, we’d advise that you keep an eye on the forecast and warnings for your area.”

Although this will be the first widespread cold spell of the season, it is fairly typical for mid-late November and it’s not unusual to see snow to lower levels in the north of the UK in late autumn. In recent years the most notable snow event was in late November 2010 when there was lying snow across parts of northern and eastern Britain.

This cold spell will be fairly short-lived with temperatures expected to return to more typical values for the time of year early next week with the weather remaining unsettled.