One metre of rain to fall in the Bay of Bengal

Parts of the Ganges Delta have already seen over 240mm of rain in just 24 hours and coastal areas to the north of the Bay of Bengal are expected to receive over 1000mm over the coming 48 to 72 hours. The area will also see some strong winds, with gust of up to 60mph along the coast. This severe weather is likely to have significant impacts with a risk of flooding, landslides and damage to infrastructure. 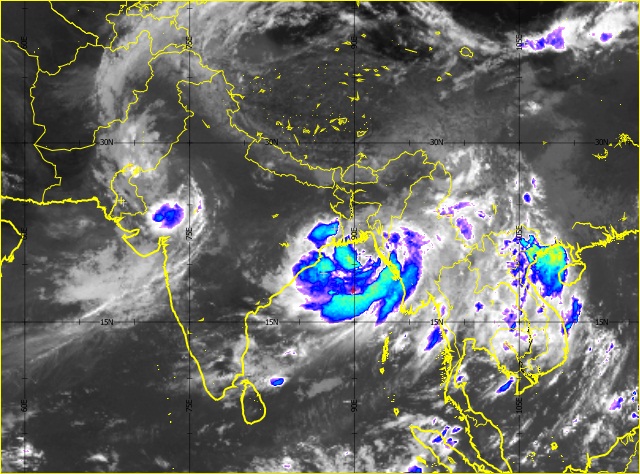 Satellite image of monsoons over Pakistan, Bay of Bengal, and South China

After a break in monsoon rainfall across parts of India through much of July, the region is now experiencing a more active phase. Over the Bay of Bengal, a deep monsoon depression has developed, bringing a period of prolonged heavy rain and strong winds to coastal districts of northeast India, Bangladesh and northwest Myanmar. A monsoon depression is an area of low pressure which brings intense rainfall, and with other ingredients in place, can develop into a tropical cyclone.

The monsoon depression is expected to remain slow moving, tracking into Bangladesh over the next few days before gradually moving west across northeast India over the weekend.

Unusually, this is one of three monsoon depressions affecting South Asia. As well as the monsoon over the Bay of Bengal there is a monsoon bringing heavy rainfall to northwest India and Pakistan with as much as 430mm of rainfall falling in 24 hours. A third slow-moving depression is also affecting northeast Vietnam and southeastern China. 543mm 718mm has fallen in 42 66 hours in Mong Cai City on the border between Vietnam and China, an area that was affected by Tropical Storm Kujira last month.

Elsewhere in the world, the hot dry conditions which have affected southern Europe through much of July have led to some wildfires in Catalonia, Spain, and the Provence region of France. There is expected to be some respite from the high temperatures across Spain and France though in the coming days as a cold front pushes in from the north bringing a risk of heavy showers and thunderstorms to northeast Spain and Southern France by the weekend.