In our blogs of 9 July and 13 July we described how the developing El Niño and a cyclical phenomenon known as the Madden-Julian Oscillation have combined to produce a period of high tropical cyclone activity in the Pacific. Nine storms developed inside two weeks – Linfa, Chan-hom, Raquel, Nangka, Ela, Halola, Iune, Dolores and Enrique. This is the highest number of Pacific tropical cyclones to form inside a two week period since 1968. 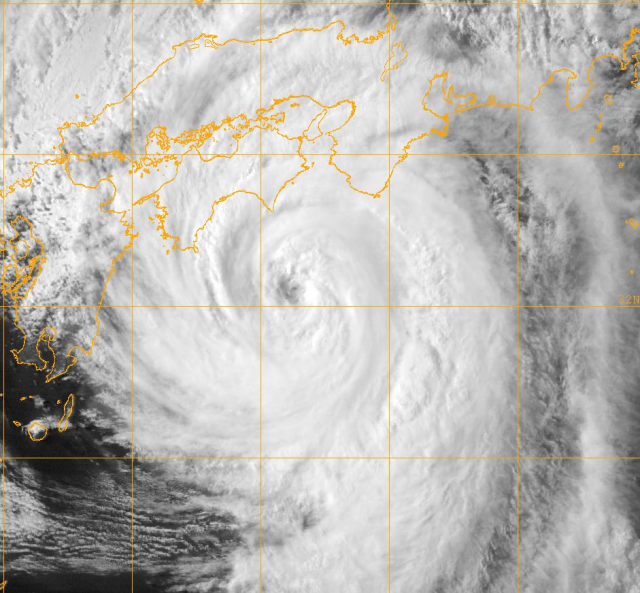 Typhoon Nangka on 16 July 2015. Image courtesy of The US Naval Research Laboratory.

Typhoon Nangka formed almost two weeks ago close to the International Dateline and made a steady westward journey peaking in strength with winds of near 150 mph. It then turned north and started to weaken, but is now making landfall over southern Japan, still at typhoon strength.

Japan can sometimes receive several typhoon strikes in a season, but each time they bring much disruption and some destruction through a combination of wind, surge and rainfall. It is often the rainfall that can be most devastating as the typhoon draws huge amounts of moisture from the warm tropical ocean and deposits it over land.

Kamikitayama in southern Honshu has recorded 438.5 mm (17.3”) rain in a period of 24 hours and this is before the eye of Typhoon Nangka has even made landfall. It is possible that some locations could record over 600 mm of rain by the time the typhoon has passed. To put that into context, that’s more than the yearly rainfall for some parts of east England.

As Nangka crosses the islands of Shikoku and Honshu it is expected to weaken, but continue to produce heavy rain. Once over the Sea of Japan, Nangka is likely to make a rightwards turn and so could affect parts of northern Japan before finally dissipating.

Official warnings for the latest tropical cyclones in the western North Pacific are produced by the Japan Meteorological Agency. The Met Office routinely supplies predictions of cyclone tracks from its global forecast model to regional meteorological centres worldwide, which are used along with guidance from other models in the production of forecasts and guidance. We also provide updates on current tropical storms via @metofficestorms on Twitter.