The second named tropical storm of the north Atlantic hurricane season, Bill, has been making headlines this week after it made landfall in the US on Tuesday night.

Bill arrived southeast of Houston, Texas where it weakened into a tropical depression as it moved inland. It didn’t weaken as quickly as might normally be expected and this was due to Brown Ocean Effect. 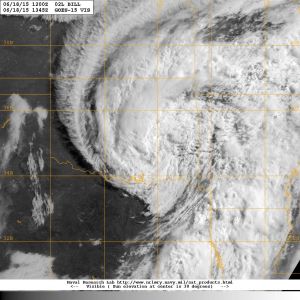 Tropical storms or cyclones tend to get their energy from warm sea water, and weaken once they move across land. However, given the time of year, the ground has warmed significantly across southern states, and the ground is saturated following a recent record wet May. This means that there is enough heat and moisture available to mimic the ocean, hence the name Brown Ocean Effect. The effect is boosting Bill as forecast, and enabling it to dump phenomenal amounts of rain across parts of Texas and Oklahoma.

Tropical Depression Bill brought 70 to 80mm of rain across parts of southern Texas on Wednesday, with many rivers in the region flowing at high levels after recent heavy rainfall. Thursday could see more than 100mm for parts of Oklahoma and Arkansas, potentially leading to some flash flooding. The remnants of the storm are then expected to continue north-eastwards towards the south of the Great Lakes, moving offshore again close to New York.

By the time the remnants of Bill cross the Atlantic towards the UK, it will be indistinguishable from any normal low pressure we’d expect to see at this time of year.

It’s too early to say what impact, if any, Bill would have on the UK – but we wouldn’t expect any possible impacts to be anything out of the ordinary for UK summer weather.