The UK may be experiencing what looks likely to be a milder than average winter but other parts of the globe are struggling against some extreme weather conditions.

Heavy snow is expected to affect large parts of Turkey, Georgia, Armenia and SW Russia early this week. As the cold conditions spread east later in the week, strong to gale force winds and heavy snow are expected across more eastern parts of the Mediterranean.

This will lead to the Middle East seeing temperatures 10 or 15C below normal for the time of year. For example, overnight temperatures could fall to -10C in Syria by mid week, with daytime temperatures struggling to rise above freezing.

This is likely to have a significant impact on refugees and the humanitarian aid agencies in Turkey, Jordan, Lebanon, Syria and Iraq, with problems enhanced by the threat of frozen water supplies. Although overnight temperatures of -5 to -10C are expected, these values may well fall much lower if there is snow cover.

Large areas of the USA and Canada are experiencing very cold conditions, with the threat of heavy snowfall across some parts over the coming days.

The eastward movement of a cold front over the weekend has dragged very cold air down from the arctic. Temperatures across parts of Canada have fallen to -30C, and widely across North America, daytime temperatures have ranged between 0 and -6C, with the bitterly cold conditions enhanced by strong winds.

As well as the low temperatures, some parts have seen heavy snowfall, such as the Pacific Northwest and areas to the east of the Great Lakes.

Further heavy snowfall is expected this week, particularly down-wind of the Great Lakes due to “lake effect” snow. This is caused when cold flows across relatively warm bodies of water such as the Great Lakes. The air rises in strong convective currents which creates clouds and heavy precipitation. In these very cold conditions, the moisture in the clouds will fall as snow. 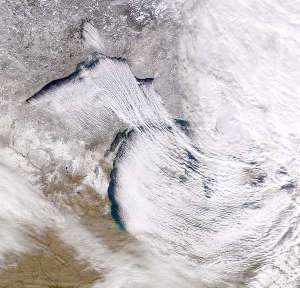 The significance of this is highlighted by snowfall projections over the coming days. Lake Ontario, the easternmost of the Great Lakes with a surface area of 18,960 km2, is expected to bring narrow bands of heavy snow to areas east of the lake. These narrow bands could generate 2-3 feet of fresh snow over the next 24-36 hours causing significant disruption.

Whilst the freezing temperatures are expected to last throughout the week, temperatures may recover slightly through the weekend.

Will the US weather affect the UK?

The cold conditions will have the effect of strengthening the jet stream, which will move close to the UK over the coming days. This will bring unsettled conditions through this week, with spells of wet and windy weather, particularly across northwestern parts of the country. However, it will be mild, particularly towards the end of the working week when daytime temperatures could reach around 14C.

There is the potential for the remnants of this cold air to move eastwards across the Atlantic to affect the UK over the weekend. However, the airmass will become heavily modified by the Gulf Stream, and there is little risk of the extreme temperatures over North America affecting the UK.