A closer look at ‘weather bombs’

With strong winds affecting parts of the country today, there has been a lot of talk about ‘weather bombs‘ – but what are they and what do they mean for our weather?

First of all, it’s important to stress the UK is not being ‘hit’ by a weather bomb – the track of the low pressure system is well to the north of the UK, on roughly the same latitude as Iceland. We’re feeling its influence remotely.

This means we are not getting the very strongest winds associated with this system, but far north-western parts of the UK are seeing winds in the 70-80mph range as forecast. Further south the winds are much less strong – so London, for example, is unlikely to see even gale force gusts and mean wind speeds will be much lower.

Another point is that the ‘bomb’ element, the rapid deepening of the low pressure as explained below, happened on Monday – and its now just like any other powerful Atlantic low. In fact, the weather we’ll experience today is nothing unusual for the time of year.

Chart showing a low pressure in the north-west Atlantic at midday on Monday 8 December. 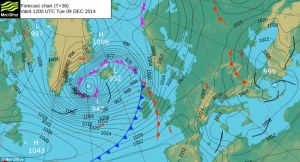 Chart shows the same system 24-hours later, with a 26 millibar fall in pressure.

So what is a ‘weather bomb?’

A ‘weather bomb’ is more usually referred to as ‘explosive cyclogenesis’ and is a meteorological term describing the rapid fall in central pressure of a depression (or low pressure) – it has to fall by 24 millibars in 24 hours in our latitudes to meet the criterion.

In many ways a ‘bomb’ can be seen as simply a more powerful, more intense version of the kind of Atlantic low pressure systems that normally affect the UK.

Climatologically speaking, explosive cyclogenesis events, or bombs, tend to occur most frequently over sea near major warm ocean currents, for example over the North Atlantic Ocean near the Gulf Stream or over the Western Pacific Ocean near the Kuroshio Current.

An explosive cyclogenesis event in these regions would then tend to happen as a particularly intense jet stream (which is a narrow band of strong winds high up in the atmosphere) interacts with an existing, and often weak, low pressure lingering near one of these warm ocean currents.

In other words, as with so many things in meteorology, it is the coming together of multiple ingredients that allow a ‘bomb’ to develop.

How many ‘bombs’ a year – and what is the impact?

There are gaps in the global observational record, so it’s difficult to give a definitive number of how many ‘weather bombs’ are seen globally each year. However, recent estimates based on a twenty to thirty year dataset suggest there are somewhere between 45 and 65 explosive cyclogenesis events per year, with more ‘bombs’ occurring in the northern than southern hemisphere.

Of course, it’s important to realise that the definition of a ‘bomb’ is somewhat arbitrary and ‘just a number’; a depression deepening only slightly less than 24hPa in 24 hours will still be a powerful depression more than capable of producing severe weather.

Another important point is that the track a ‘bomb’ takes relative to the British Isles, and at what stage of its development it does so, are key to its impact on UK weather – in general the closer the ‘bomb’ tracks to the British Isles the more severe the weather.

7 Responses to A closer look at ‘weather bombs’