Winds have decreased but it remains a very strong tropical cyclone with steady speeds estimated to be around 115mph and gusts peaking around 144mph when it made landfall. The storm is expected to continue to gradually weaken as it continues to track westwards across the Philippines over the next couple of days.

Rainfall on island of Samar has been between 300 and 400mm in the last 24 hours – Borongan has seen 396mm and Catbalogan 360mm. It is expected that the heavy rain will continue to give the greatest impacts as the typhoon moves slowly west over the next few days, bringing the potential to cause give widespread flash flooding and landslides.

The latest forecasts of the track of the typhoon continue to show it moving over the north of the Sibuyan Sea to Masbate/SE Luzon passing to the south of Manila on Monday. Hagupit is expected to have weakened to a Tropical Storm over the South China Sea during Tuesday 9th December (UK time). 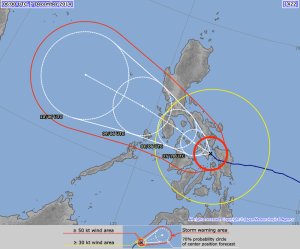 Met Office scientists continue to work closely with counterparts at the Philippines weather service PAGASA. We are providing the latest information on computer model predictions helping PAGASA to ensure the citizens of Philippines can take the precautions necessary to protect themselves and their property where possible. We have also been providing information to Government departments such as FCO and DFID on the likely impacts of Typhoon Hagupit.

Official warnings of west Pacific tropical storms are produced by the Japan Meteorological Agency. The Met Office routinely supplies predictions of cyclone tracks from its global forecast model to regional meteorological centres worldwide, which are used along with guidance from other models in the production of forecasts and guidance.