The Atlantic hurricane season as a whole in 2014 has been fairly quiet, but the last week has seen two hurricanes develop. Fay briefly reached hurricane status and brushed passed Bermuda. However, this was just a foretaste of what is to come.

Tropical Storm Gonzalo formed just east of the Caribbean on Monday and passed over several islands such as Antigua, Anguilla and St. Martin bringing a period of strong winds and rain. However, it was after moving away from the Caribbean that Gonzalo rapidly strengthened into the strongest hurricane seen in the Atlantic since Hurricane Igor in 2010. At its peak, it was a category 4 hurricane with sustained winds of 145 mph. Since then there have been small fluctuations in intensity, but Gonzalo has maintained its status as a major hurricane.

The last major hurricane to impact Bermuda was Fabian in 2003 which produced sustained winds of 120 mph and a storm surge of three metres to coastal areas causing extensive destruction and some loss of life. Prior to this, we have to go back to 1926 to find a hurricane of similar intensity which struck Bermuda.

On its current forecast track the eye of Hurricane Gonzalo is expected to pass over or just to the west of Bermuda late today. Winds of over 100 mph are likely together with a storm surge similar to that seen in Hurricane Fabian and accompanied by heavy rain. Consistent forecasts of the track of Gonzalo have allowed residents several days to prepare for the onset of the hurricane which is likely to have a major impact on the island. 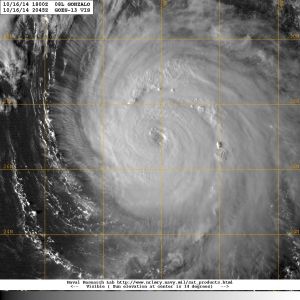 Having crossed Bermuda, Gonzalo is expected to race north-eastwards across the Atlantic. It will weaken as it crosses cooler waters and start to make the transition into a mid-latitude depression. Latest forecasts indicate that the remnants of Gonzalo are likely to pass over the northern UK late on Monday and early on Tuesday. It will bring a brief spell of wet and windy weather with gales in places – fairly typical for this time of year.

At this stage extreme conditions seem unlikely, but we’ll keep a close eye on developments over the next few days and keep everyone up to date if it looks like there is any sign of severe weather heading for the UK.

Official warnings of Atlantic hurricanes are produced by the National Hurricane Center. The Met Office routinely supplies predictions of cyclone tracks from its global forecast model to regional meteorological centres worldwide, which are used along with guidance from other models in the production of forecasts and guidance.