You may be lucky enough to get a glimpse of the northern lights in Scotland, and if you are really lucky in northern England and Northern Ireland, late Friday night into Saturday morning. The aurora borealis is caused as a result of activity on the surface of the sun.

Occasionally there are large explosions on the Sun and huge amounts of magnetically charged particles are thrown out into space (Coronal Mass Ejections). If these particles travel towards Earth they interact with the Earth’s magnetic field and increase global geomagnetic activity. The increased activity releases energy into the atmosphere giving off light in the process, which we call the Northern Lights or the aurora borealis.

There are currently two Coronal Mass Ejections (CME) en route to Earth. The first should arrive tonight (Thursday night) giving the earth’s atmosphere a glancing blow, the second is likely to arrive later on Friday. Their combined effect increases the chance of an aurora borealis event Friday night/Saturday morning, particularly at high latitudes in Scotland.

To view the Northern Lights you are best finding a dark place away from street lights. You will need a cloud-free sky and although there will be some cloud and localised fog patches around this Friday night there should also be some clear skies too. So there is a chance of catching a glimpse of the lights. Your best chance of sighting the aurora will be around midnight. 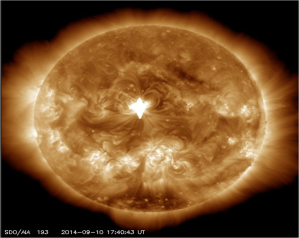 X-Class Flare erupting from The Sun. This event led to an Earth directed Coronal Mass Ejection

Keep an eye on the Met Office forecasts for the latest information.