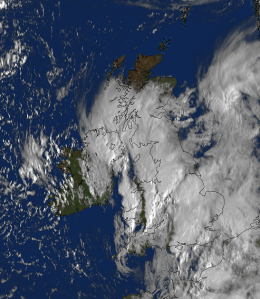 The heaviest rainfall overnight was recorded at Balatasound in Shetland where 48.8mm of rain was recorded as a previous low pressure system moved away from the UK, while Bute Park in Cardiff saw 40.6mm as the remnants of ex-hurricane Bertha move in from the southwest.

The highest hourly total was 18.4mm at Wisley in Surrey between 9 and 10am this morning and Coventry in the West Midlands seeing 18.2mm in the same time.

The table below shows a selection of the rainfall recorded at Met Office observing sites across the UK between 10pm on Saturday 9 August and 10am on Sunday 10 August 2014.

The winds have picked up as well with a gust of 53mph being recorded at Berry Head, Devon betwen 5am and 6am this morning. The table below shows the wind speeds recorded between 1am and 10am today.

The rain will continue to move north across the UK during the rest of today and the winds will stay strong and gusty and we encourage everyone to keep up to date with the latest forecasts and national severe weather warnings.