Met Office meteorologist Simon King has just returned from Afghanistan where he has been part of a crack team forecasting the weather for our Armed Forces. He has been working with the Met Office’s Mobile Met Unit (MMU) which gives advice on the potential impact of weather on armed operations. 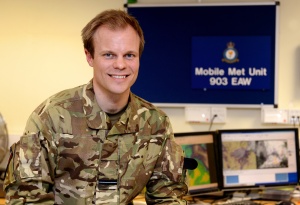 Simon has been a Met Office meteorologist for eight years and is also an Officer in the Royal Air Force Reserve having completed tours in Iraq and Afghanistan. In a war zone weather can have a major influence on military operations and during his most recent tour in Afghanistan, Simon says his forecasts helped “forewarn of a major thunderstorm which turned the ‘normal’ dirt and sand into very unpleasant muddy conditions and enabled the military to take appropriate action mitigating any major impacts to their operations.”
The MMU is a sponsored RAF reserve unit made up of around 50 Met Office volunteers who have undergone military as well as meteorological training. They help the UK’s Armed Forces and allies understand the impact of weather on military activities and can help keep troops safe.

Simon explains: “Work at the Met Office in Camp Bastion is intense, with four members of staff providing 24/7 cover doing both observations and forecasts. While the weather and forecasting is a challenge, we are also working in a hostile environment with numerous threats.”

On his most recent tour temperatures were much cooler than the average and perhaps not quite as warm as people might think for a desert. While Simon was there temperatures were around 5/6 °C or lower at night with maximum temperatures around 16-20 °C, occasionally reaching 25 °C.

In addition to his work for the military Simon King also presented the weather on 5Live Breakfast one morning live from Afghanistan. He says “as I had access to the same meteorological information in Camp Bastion as I would at my desk in the UK, it wasn’t an issue to put together a UK forecast. In fact, as Afghanistan is four and a half hours ahead of the UK, it did mean there was no 4.15am alarm call and the first broadcast was at 11am!”

As well as working in Afghanistan MMU advisors work closely with our armed forces involved in other operations and exercises in the UK and overseas. A reliable and efficient delivery system, managed by a team of dedicated MMU Engineers, ensures our advisors have access to the most up-to-date weather information, when ever and where ever they need it. This includes outputs from our high-resolution forecasting models and support from many other Met Office teams such as IT, Science, Observations, and Operations.