From field to fork – gardening, cooking and the weather

Following a colder than normal March and April, we talked to River Cottage head gardener Craig and sous chef Gelf about how the weather is impacting the food they grow and cook.

Reacting to the weather

Partly due to its setting in a valley, the River Cottage headquarters at Park Farm often experiences changeable weather conditions.

Craig checks the forecast several times a day to help plan the work of the gardening team; from planting to irrigation, their work is very much dependent on what the weather is doing.

Although forecasts help with day-to-day planning, it’s not just the current weather that’s important – longer term weather patterns also play a big part in Craig’s work. Because of the particularly cold March, planting schedules were revised and some of this year’s veg is growing slower than usual, so Craig also works with the kitchen to help them use the ingredients that’s ready to eat now in their menus.

In our video, Craig and Gelf talk us through their roles at River Cottage and how they deal with the UK’s variable weather conditions.

When we visited, the rhubarb was ready to eat, so Craig picked some for Gelf to use in the kitchen. If you’re salivating at the rhubarb and brioche pudding Gelf cooks in the video, you can recreate it at home using the recipe below. 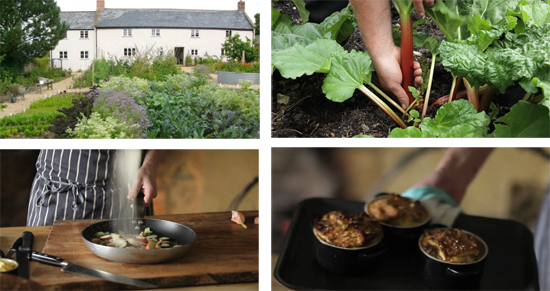 ½ a loaf of brioche

Place the rhubarb in a pan large pan with the water and sugar. Spread them out so it’s as close to single layer as possible. Put a lid on and cook gently for 5 – 10 mins on the lower of the hot plates until soft. Don’t stir it too much and it will retain some of its shape.

Remove the rhubarb from the heat and strain through a sieve to remove any excess juice. Allow to cool.

Cut the crusts off the bread and cut it in to slices that roughly correspond to the depth of the oven dish you have chosen for the pudding.

Spread both slices of the brioche with butter, then use any leftover butter to grease the dish.

Split the vanilla pod open lengthways and place it in to the pan with cream and milk. Then bring this almost to the boil. Remove from the heat and leave to infuse for a few minutes.

In a large bowl, whisk the eggs, egg yolks and caster sugar till until they are thoroughly blended. Remove the vanilla pod from the hot cream mixture then pour the cream over the eggs and sugar whisking all the time, until you have a thin but smooth and well blended custard. Arrange the first layer of the buttered bread slices in greased dish.

Half of the rhubarb compote over this. Place the next layer of brioche on top of this and spread the remaining rhubarb compote on top of this. Strain the custard over the brioche slowly and carefully, a little at a time, so it can seep and ooze between the cracks. If it looks like flooding over the side of the dish, wait a few minutes for it to soak into the bread before adding more. In any case, leave the pudding to infuse for about half an hour before you put it in the oven. You don’t have to use all the custard, but you should use enough to make sure that only a few millimetres of unsoaked bread are at the top of the pudding.

Bake in a medium oven (170degrees/gas mark 3) for 35 – 35 minutes, until the top is golden brown and the custard is set but still slightly wobbly in the centre. This pudding is delicious hot, warm or cold and really needs no accompaniment.