The NASA Space Apps Challenge winners have been announced and the T-10 challenge from the Met Office event in London has won the Most Inspiring Award. 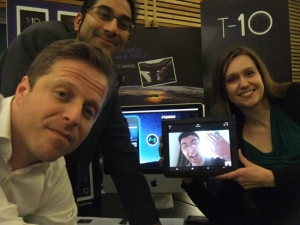 The idea of T-10 was to create an app that could be used in space which would save astronauts time, whilst also connecting Earth and Space. T-10 is a prototype mobile application for use on the International Space Station. Astronauts can choose specific points of interest they wish to photograph, and T-10 will alert them shortly before the station is set to fly over that location if the current weather permits photography.

The app also can also alert astronauts to interesting weather phenomena and upload photos directly to Twitter, as well as alert Earth-based users when the ISS will fly overhead.
British astronaut Tim Peake tweeted “Congrats – great result. Means I shouldn’t ever miss a pic during my mission.”

The team’s next steps are to launch an earth app shortly which will feed data into the International Space Station Wave map.

Honourable mentions were also received for People of Soil in the Galactic Impact category, which was also worked on at the event in London. Two challenges from Exeter also had honourable mentions in the Best Use of Hardware category – Arduhack and Web Rover 1.

Some of the challenges were showcased at the Victoria and Albert Museum Digital Futures exhibition. Martin Roth, Director of the V&A said: “We are delighted to hear that T-10 have won a global award for their brilliant concept. The V&A seeks to inspire creativity and innovation and we are proud to have hosted T-10 and other teams involved in NASA’s International Space Apps Challenge at our Digital Futures event this week. It is great to see such ambitious collaborations between artists, designers and engineers help us understand the universe around us.”