The worst storm in years?

Various articles in the news today said that the weather over the weekend was the worst storm to hit the UK in years, and that there is more to come this week. There was indeed a very deep area of low pressure in the Atlantic over the weekend. At its deepest, on Saturday 26 January, the central pressure of the depression was 932 millibars and it was sitting some 1,800 nautical miles west of the UK. It came closest to the UK during the day yesterday with a central pressure of 950 millibars but was still around 600 nautical miles to the north west of Scotland. 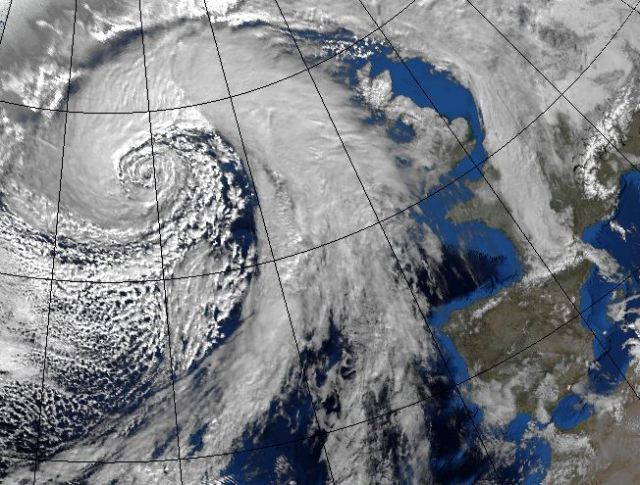 To put this into context, the storm that affected the UK on 3 January 2012 had a central pressure of 953 millibars but was centred right on the west coast of Scotland and brought winds in excess of 80 mph to the Central Belt and a gust of over 100 mph in Edinburgh. Property was damaged, as well as trees, and there was disruption on the road network and with ferry crossings. Power supplies were also affected significantly.

The storm in January 2012 was therefore much more disruptive and severe than any wet and windy weather we have seen so far this year.

Much of the recent severe weather has been attributed to the phrase “Weather Bomb”, which is not a perfect meteorological term but is defined as an intense low pressure system with a central pressure that falls 24 millibars in a 24-hour period. This happened to the depression over the Atlantic during the weekend but as it was miles away from the UK its impacts were minimal. A better description can be more directly linked to the meteorological phenomena known as rapid cyclogenesis. This is where dry air from the stratosphere flows into an area of low pressure. This causes air within the depression to rise very quickly and increases its rotation, which in turn deepens the pressure and creates a more vigorous storm.

1 Response to The worst storm in years?