As many as 60 million people across 12 US states are thought to be in the path of Hurricane Sandy, which has been given the nickname “Frankenstorm”.

Hurricane Sandy is currently moving northward, parallel to the US East Coast, and is expected to make a turn towards the northeast US coast later on today. However, strong winds and stormy conditions are already being felt from North Carolina to New York. 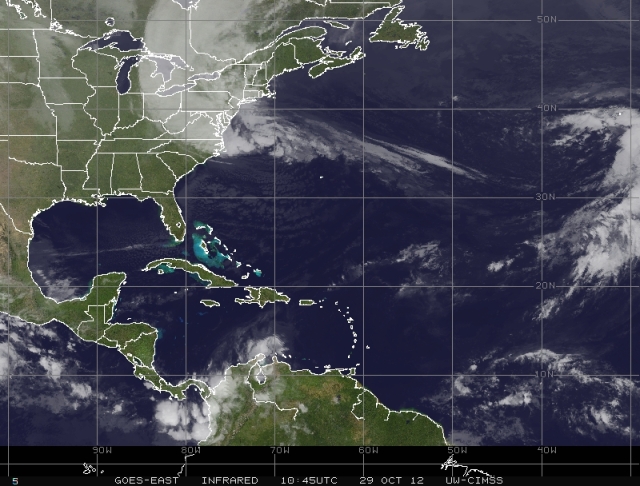 Sandy looks set to impact parts of the mid-Atlantic and north-eastern USA like last year’s ‘Halloween Nor’easter’ storm of 2011 and the ‘Perfect Storm’ of 1991. As Sandy approaches land the warm moist air circulating within the hurricane will meet cold air spreading south into the north-eastern USA from Canada. This provides the potential for the storm to develop further and produce severe winds, heavy rain, flooding and even snow on its north and west flanks as it hits land.

Uncertainties remain as to the precise location and timing of landfall. The latest forecast from the National Hurricane Center takes Sandy over the Mid-Atlantic states, very close to Delaware and New Jersey, later on tonight or Tuesday morning. However, due to the large size of the storm (around 600 miles across), the impacts from Sandy will be widespread and not just limited to where the centre of the storm makes landfall.

Storm surge, combined with high tide, could cause extensive flooding to low lying areas, between 4 and 8 inches of rain could fall over portions of the northeast coast and 2 to 3 ft of snow is expected in the mountains of West Virginia.

This is the second time in two years that New York will have been impacted by a tropical system. Only last year Hurricane Irene travelled up the east coast of the US and made landfall with winds of 65 mph in Brooklyn, New York. However, Sandy could have a larger impact than Irene due to it’s larger size, stronger winds and greater storm surge.

Hurricane Sandy has already cut a swathe through the Caribbean, bringing strong winds, heavy rain and storm surge to Jamaica, Cuba, Haiti and the Bahamas. At least 60 people have been killed, properties damaged and flooded, and large parts of Jamaica were left without power.

The National Hurricane Center and the US Federal Emergency Management Agency (FEMA) are providing warnings and advice to those who are potentially at risk from the storm. The Met Office routinely supplies predictions of hurricane tracks from its global forecast model to NHC which it uses along with guidance from other models in the production of its forecasts and guidance.

You can find out how tropical cyclones, including hurricanes, form in this video