August and September are the months when tropical cyclone activity in the northern hemisphere reaches its peak. As August begins there are currently several active tropical cyclones and possibly more to come.

Typhoon Saola formed in the west Pacific and gave a glancing blow to the northern Philippines. Over 900 mm rain in three days were recorded in Baguio. There were reports of flooding across northern Luzon and a number of fatalities. Saola has now slowly moved on towards Taiwan dumping similar amounts of rain and causing flooding and mudslides. It is expected to move onwards to Fujian province of China in the next day or so.

Meanwhile to the north of Saola the more compact Typhoon Damrey has tracked just to the south of Kyushu in south-west Japan. This area is still recovering from the devastating floods of last month. The typhoon has tracked across the Yellow Sea and is set to make landfall over the Handong province of China just south of the large city of Qingdao. 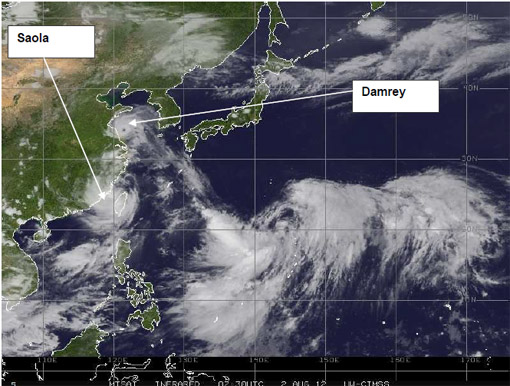 These two typhoons are part of a large complex area of disturbed weather covering much of the tropical western Pacific. Another storm is forming out at sea and latest forecast suggest it could track close to southern Japan in a few days time. There are even suggestions that yet another storm could develop a few days later in the open waters of the west Pacific.

Meanwhile in the Atlantic after an active start to the season, July was completely stormless. August has started with the formation of a depression which looks set to track through the Leeward Islands and into the Caribbean Sea. However, there is a high degree of uncertainty as to whether this depression will undergo significant strengthening. El Niño conditions are starting to develop as predicted by longer range forecasts for the tropics from the Met Office, which acts to suppress Atlantic tropical storm activity by making atmospheric conditions unfavourable. It is possible that conditions may be hostile towards storm development in this region in the next few days, but it is by no means certain.

The Met Office seasonal forecast for Atlantic tropical storm activity issued in May predicted a near-average season with the most likely number of storms in the June to November period being 10. Since June just two tropical storms have occurred so far in this region.

1 Response to Tropical storm season heading towards its peak