The Wimbledon Championship gets underway next week, and all eyes will be turning to the sky above SW19 as Wimbledon weather watching take hold. The current outlook suggests that after the wet weather over the weekend it will turn a little drier at least for the start of the Championships with a mixture of broken cloud, bright or sunny spells and only a small risk of showers disrupting play. Like this week in the London area, temperatures will also be in the low 20’s  Celsius as well.

The latest forecast from the Met Office is that it will be feeling warmer on Monday with some spells of sunshine and only light winds. It should remain dry throughout, with only a very  small chance of a light afternoon shower disrupting play. Maximum Temperature 22 °C. 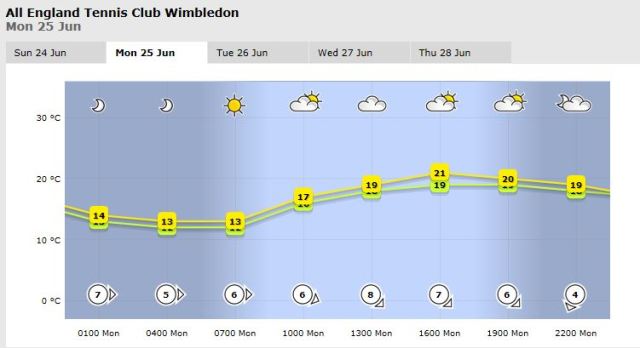 To keep up with the latest weather at the championships, visit our dedicated Wimbledon page.

Like last year, Met Office forecasters will be stationed on site for the duration of the tournament. Our forecasters will combine the latest scientific knowledge and technology from the Met Office’s headquarters in Exeter with on the ground weather reading and assessment. This means that if it’s drizzling on the ground, the on site forecaster can then access information from the Met Office’s arsenal of radars, forecasts and mapping systems to find out which direction it’s moving in the wider area and know whether it will affect play, and for how long.

Even though the new retractable roof means that play on centre court can continue when it’s raining, the weather will still impact on play on the other courts and Met Office forecasts are still used to determine when to close the roof and, perhaps even more importantly, when it is safe to open it again.

Tim Hewson, one of the on-site Met Office forecasters for last year’s tournament, said: “We can’t stop the rain from falling, but we can help the referee organise the tournament around the weather, so that spectators get to watch as much tennis as possible, and so that players don’t risk injury by playing on slippery courts.”

In the video below, Chris Tubbs, who will be on site forecasting this year, talks through the process of forecasting the weather for the championships. 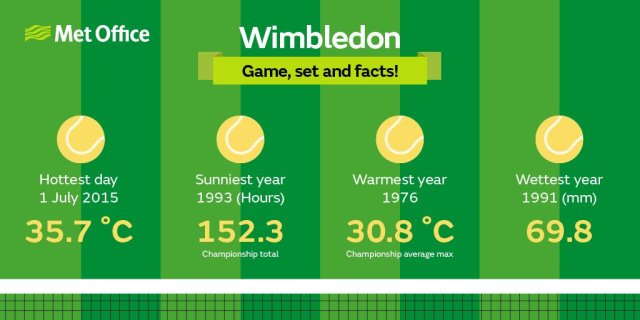 In this video, Johnny Perkins, from the All England Club, explains how the weather affects their planning for the championships and the ideal weather they hope for.