What’s bringing the cold weather to Europe and the UK?

The current cold weather across Europe is in sharp contrast to the mild, wet and windy conditions across much of Europe through December and January. The cause of the cold conditions is the development of a large ‘blocking’ anticyclone over Scandinavia and north-western Russia. Easterly winds on the southern edge of this system has transported cold continental air westwards, displacing the more usual mild westerly influence from the Atlantic Ocean all the way to the British Isles. 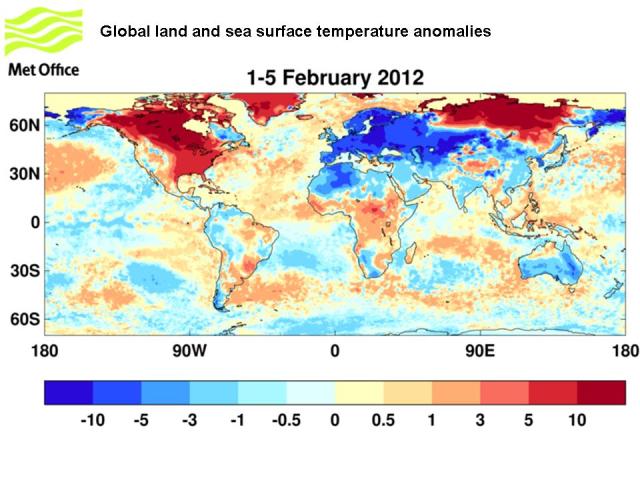 A ‘blocking anticyclone’ can be thought of being like a very large boulder in a stream. This boulder acts like a dam, stopping the flow of the stream.  In this instance a block stops the more normal westerly flow that brings milder conditions, allowing colder conditions to win out from the east.

The origin and persistence of blocks has been a subject of much research, and unfortunately we are still not absolutely clear on why we see blocks form. What we do know though is that the origins of this large blocked pattern across Europe can be traced back to the appearance of two individual regions of mid-latitude blocking over central Russia and the Bering Sea in mid January. Over the next two weeks, these two regions merged together to form the ‘block’ we see now.

The appearance of significant blocking after a long absence is reflected in the strong decline of the Arctic Oscillation (AO) index, which effectively describes a state in the atmosphere where the flow of westerly winds is either stronger or weaker than usual in the northern hemisphere. It is currently in its negative phase, meaning the westerly flow is less strong than normal. The switch to a negative AO was seen in late January and highlights the dramatic change from generally strong westerly flow to the much less westerly or even easterly blocked state.

Despite the general unpredictability of blocking patterns, there were potential signs of an increased risk of a significant cold weather several weeks ago when the high altitude winds began to weaken in longer-range forecasts. We now understand that there is a clear link between the weakening of these high altitude winds and the surface weather that operates on monthly timescales and in situations like this it can provide a ‘window of opportunity’ for monthly forecasts to warn of increased risk. Based on this understanding, the Met Office 16 to 30 day forecast has reflected the increasing risk of cold conditions since mid January.

Met Office Hadley Centre scientists have investigated and demonstrated a clear stratospheric influence on surface climate during these events, with easterly winds burrowing down through the atmosphere to affect the jet stream and surface climate. The result is a switch from mild westerly Atlantic flow over Europe to easterly winds with an increased risk of cold extremes. 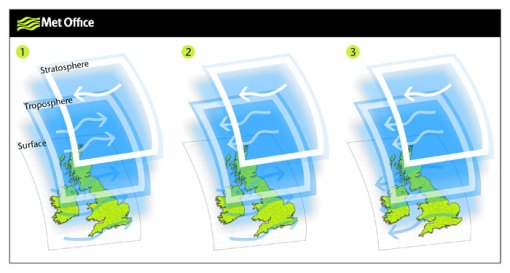 Weakening of the jet stream in the Stratosphere can allow easterly winds to move down through the atmosphere to give cold easterly winds at the surface. This can result in cold and snowy weather across the UK.

A similar situation occurred at this time of year in 2009 when we had significant snowfall across the UK and other parts of Europe, following a strong breakdown of the high altitude jet. Although only some cold winter spells can be predicted in this way, other recent winters such as 2006 and 2010 have also shown clear examples of the effect.

4 Responses to What’s bringing the cold weather to Europe and the UK?