North East Australia is on alert as Severe Tropical Cyclone Yasi heads for Queensland later this week. Those travelling to Australia should keep up to date with the latest forecasts from the Australian Bureau of Meteorology.

Severe Tropical Cyclone Yasi already has winds close to 100 mph and is expected to strengthen further as it crosses the Coral Sea to make landfall on the coast of northern Queensland. 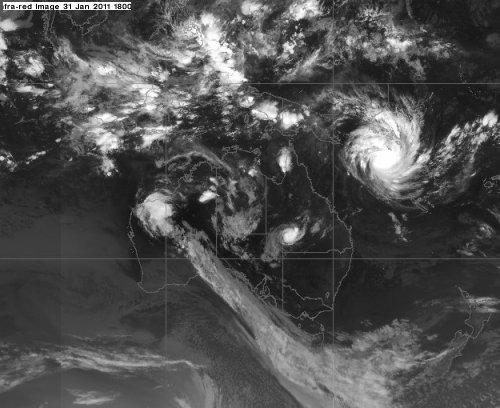 The Australian Bureau of Meteorology suggest heavy rain and damaging winds, in excess of 130 mph are expected to affect coastal and island communities between Cooktown and Yeppoon on Wednesday evening (local time), before spreading to other inland parts on Thursday.

The latest Met Office forecast has a very similar track and intensity for Yasi, and also maintains the cyclone well inland, as a significant depression. Although expected to come ashore north of where the worst of the recent flooding occurred, Yasi is a large cyclone and so will affect a wide area including some of the previously flooded regions. Very heavy rains are expected to continue as it moves towards central parts of Australia.

Using the Met Office Global Ensemble Prediction System (MOGREPS), the Met Office provides 15-day tropical cyclone forecasts of the most likely track of the storm and an understanding of the range of possible storm tracks. The system can also identify areas where a new storm is most likely to develop and then monitor the likely track of such storms.

The Met Office is providing forecasts to the Foreign and Commonwealth Office and other National Meteorological Services around in the world, to provide the best advice on the expected movement of Tropical Cyclone Yasi. Frequent updates are also available via @metofficestorms on Twitter.